I feel like there are two key things that you should know about Riders of Justice – it stars Mads Mikkelsen and it is subtitled. I tell you these two things because the first should make you want to watch the film and because I know not everyone enjoys subtitled films. In my house for example, my wife and I seldom agree on foreign films. I dislike dubbed films because I feel like I’m watching an out-of-sync video from 20 years ago. My wife, on the other hand, dislikes subtitled films because she finds it too difficult to watch a film and read the dialogue. Thankfully, Riders of Justice is subtitled, so I was excited.

My favourite thing about reviewing films is that I’m sent the production notes, which often includes director’s notes. I love reading the director’s notes, I wish they were readily available for every film I watch, not just in the press kits for the ones I review. I tend to share snippets of these notes in my review when they are meaningful and I want to share a slightly longer portion of director Anders Thomas Jensen’s words because they sent a chill down my spine as I read them.

RIDERS OF JUSTICE is a fable, set in a framework of realism. It is the tale of a group of people all of whom, on the same day, lose their sense of security as well as their lives foundation. In meeting each other they eventually respectively find: love, self-respect, trust and the feeling of belonging to a place. Everyone ends up experiencing a kind of trust, whether that is in themselves, in God or in life’s coincidences. The film depicts how our lives are affected when the unthinkable occurs. How do we keep our faith in life, when we no longer believe in anything?

Life can seem utterly meaningless, especially when we lose our loved ones. But is there any pivotal reason why we should fully understand the point of it all? Is it not so, that if we accept, we will never understand death, then being present, grateful and among those we love, is the most meaning we can aspire to in life? And is that in itself not enough?

Accepting that all around us, even our very existence, is solely governed by chance, is a tough realization… Because if everything is random, it can be argued, that everything is also irrelevant. And irrelevant is not far from meaningless. But perhaps everything isn’t all together random.

I was touched by the beauty of those words and I think they reframed the film in my mind. I’m hoping, by sharing what he wrote, that you’ll gain a little more as you watch the film.

I’ve been a fan of Mikkelsen for a long time, but I really fell in love with the actor in 2015 at a Sick Kids charity breakfast held as part of Fan Expo Canada. He’s captivating on screen, but, in person, it is elevated. In Riders of Justice, Mikkelsen plays deployed soldier, Markus. While on deployment, a accident on a train leaves him widowed and he returns home to care for his daughter. He believes that the entire thing is an accident until a group of math and computer geeks argue otherwise and give him a target. They become an unlikely group and that’s where a lot of the films humour comes from, particularly from Emmenthaler (played by Nicolas Bro). As the group prepares for revenge, Markus works to keep everything secret from his daughter, with whom he already has a strained relationship. The “geek squad” manages to help him on this front and what starts as an action/thriller with a healthy dose of dark humour, ends up having a dramatic element that involves a lot of broken people becoming whole again. If you re-read Jensen’s quote above, you’ll understand why I found it so powerful against the backdrop of the film.

This film is filled with gut punches, laughs, and moments where you’ll ask yourself, “WTF?” There’s blood, death, and tears. At the heart of the film, you’ll find camaraderie in the most unusual of places, the birth of a family bound by love instead of blood, and a reminder that no matter how dark it is, there’s a light in the distance. That may sound like a lot of cliché, and it probably is, but the way it is presented in the film is anything but. It is a well woven tale that, due to being a subtitled foreign film, will be overlooked by many. Please don’t do that, the only one you hurt is yourself. I was surprised to find tears in my eyes at the end of the film and I think you will be to.

Riders for Justice will have a limited release in theatres on May 14, before a wider theatrical and On Demand release on May 21. 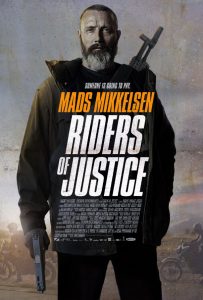 Movie description: RIDERS OF JUSTICE follows recently-deployed Markus, who is forced to return home to care for his teenage daughter after his wife is killed in a tragic train accident. But when a survivor of the wrecked train surfaces claiming foul play, Markus begins to suspect his wife was murdered and embarks on a mission to find those responsible.