I finished this movie and I’m still not entirely sure what I just watched. Burn is an intensely dark thriller with one of the most interesting lead characters I’ve seen in a while. Melinda, played by Tilda Cobham-Hervey, is described by the film’s writer/director, Mike Gan, as an anti-hero. That’s not the first word that comes to mind when I see her on screen, nor was it the last thing I thought as the credits rolled. She is a disturbed, complex, completely human character who doesn’t quite know her place in the world. I guess, in some ways, I did just describe an anti-hero, but that definitely wasn’t what I thought while watching the film. It’s probably best to quote Gan here.

Melinda, our anti-hero in BURN, rivals any of them. Vulnerable yet powerful; terrible yet sympathetic. However, this wasn’t an arbitrary exercise in gender reversal. Melinda wasn’t written to be a woman. She just happens to be one. In BURN, we explore what happens to deprived people who get bullied and rejected to a breaking point; fight back; then try to find themselves in the aftermath.

I really enjoyed the film. It was dark and creepy, but it was an interesting thriller, one that keeps you questioning what will happen next and why it is happening. I think that’s the best part of this movie, the entire time you watch it, you just keep saying, “WHY?”

So let’s talk about the film. The entire movie takes place in a gas station where Melinda arrives to replace Sheila (Suki Waterhouse) during a shift change. While the two women are both still working, Billy (Josh Hutcherson) shows up to rob the place. What ensues is a gripping thriller involving death, kidnapping/hostage situations, and fire. This is not, however, your typical story and, at times, it is difficult to tell who is the real villain. That’s because Melinda, Gan’s Anti-Hero, is played by an amazing unknown (to me) actress who deserves all of the credit for this film’s success. Tilda Cobham-Hervey has not appeared in many films, but she is clearly on the road to becoming a Hollywood superstar. Her portrayal of Melinda is top notch and it is her performance that sucks you into the film and keeps you wanting more. Everything about her performance – mannerisms, interactions, and speech – are at a calibre above that of her co-stars. That’s not to say that Waterhouse and Hutcherson are bad, they are both great actors and do an awesome job, but Cobham-Hervey is in a league of her own in this film.

If you have a fragile psyche, this may not be something you want to watch. Watching someone put their own fingers in hot coffee as a coping mechanism is painful. You want to feel for Melinda and her social awkwardness because watching her talk to strangers and attempt to befriend them is also painful, but in a different way. When she burns herself, you get a shiver down your spine, but when she’s rejected by another person, your heart breaks. That’s what Cobham-Hervey does so well, she breaks your heart one minute and gives you a reason to curl up into the fetal position the next. I guess she really is an anti-hero, you want to like her, but there’s definitely reasons not to. In the end, for all the terrible things that happen, you feel like Melinda is stuck tumbling down the hill. She can’t stop herself and she just keeps picking up speed. It may not be what she wants to do, but her previous actions paired with her awkwardness and poor decisions drive her straight into her next misstep. Her life feels like a train wreck and you just can’t look away.

Check out Burn in theatres and on digital and on demand on August 23, 2019. 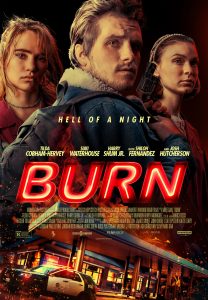 Movie description: BURN follows a lonely, unstable gas station attendant Melinda (Tilda Cobham-Hervey), tired of being overshadowed by her more confident, outgoing co-worker Sheila (Suki Waterhouse). When the gas station is held at gunpoint by Billy (Josh Hutcherson), a desperate man in need of quick cash, Melinda finds an opportunity to make a connection with the robber, regardless of who gets hurt.