I wasn’t sure what to expect when I sat down to watch a 2 hour film called The Marijuana Conspiracy that takes place in Toronto in 1972, particularly one based on a true story. The film is based on a study that never produced any sort of results. It was a subject of an article in 2013, published by the Toronto Star’s Diana Zlomislic, who is credited as an associate producer on the film.

After discovering this remarkable true story about bizarre experiments studying the effects of marijuana on young women in 1972, I knew it would make for a provocative and entertaining film.

In the film, the study recruits unwed women between the ages of 18 and 25 for a 98-day “voluntary incarceration.” The group of 20 women are split into 2 groups, one half is the control and the other half must smoke weed every night – we follow the group that tokes. They are provided with a place to stay and the marijuana, but everything else must be earned. They are given tokens in exchange for producing quality macramé products. If they don’t produce, they don’t get “paid” their tokens. If the women leave the study early, they don’t get paid at all. While the film is intriguing, it is also a disturbing look at government funded human testing that never should have happened. The participants are left with so many needle marks from their daily blood draws that they look like drug addicts. I won’t get into the twists and turns of the film, even though they are available to read in the above article and many other places online. Instead, I suggest you avoid reading up and first watch the film so that you can see how things play out.

What I would like to discuss is the quality of the film. This film looks and feels like a high quality, high budget film. The lighting, the cinematography, and the music are all top notch and create a great atmosphere for the film. The only complaint I have about the overall feel of the film is the filming locations. They use Kops Records for a scene in the film. The film is set in 1972, but Kops didn’t open until 1976. Similarly, the water front scenes outside the windows of one of the offices felt misplaced knowing what is in that location. These were minor gaffes that likely won’t be noticed by those outside of Toronto, so they are easy to forgive… especially given the overall quality of the film.

The film is layered with the societal mores of the early seventies, and the themes and stories that took place then, ironically parallel what is happening in the world today.
As a director, I Ioved the experience of recreating this vibrant era. It was also a pleasure to collaborate with such a talented group of young actresses who vividly brought the real women to life on screen. These women wanted answers then, and still deserve answers now.

We also need to talk about the cast. The women are the stars of the show, but I’d like to quickly mention a few of the supporting cast members. The film features two Degrassi Alums, Luke Bilyk and Jordan Todosey. It also features Derek McGrath who had a guest spot on Kim’s Convenience as well as playing Dr. Jeffcoate on My Secret Identity, one of the greatest shows of my childhood, I always enjoy seeing him pop up on screen. That said, the standouts are the women playing the participants in the study. The transformation they undergo as the film progresses speaks to their acting ability and the wardrobe and make-up departments’ skills. These 5 women – Tymika Tafari (Mourinda), Julia Sarah Stone (Mary), Morgan Kohan (Marissa), Brittany Bristow (Jane), and Kyla Avril Young (Janice) were amazing. None of them have overly impressive resumes, but I expect that we’ll see a lot more of them in the coming years because I was blown away by how well acted the film was. That being said, some of them have been in major motion pictures before and I’ve added a few movies to my “to watch” list after perusing their IMDB pages.

The film is available today, April 20, On Demand and Digital and I highly recommend checking this one out. 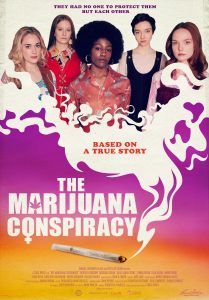 Movie description: In 1972, five young women looking for a fresh start in life become part of a radical experiment studying the effects of weed on women. Despite the agendas of the government, they use their unique strengths, and friendship to overcome adversity.

All My Puny Sorrows

I am not a religious person, but watching All My Puny Sorrows the phrase, “the sins of the father are visited upon the children” popped into my head. The film, based on a novel by Miriam […]