Tone-Deaf is a modern spin on a traditional home invasion horror film, a darkly comedic critique of the bizarre cultural and political climates in the United States, and hopefully a heck of a lot of fun.

This is how writer/director Richard Bates, Jr. describes Tone-Deaf in his director’s statement and he’s not wrong. The film attempts to bring together horror and comedy, but falls short of what I expected the finished product to be. I watched this film for one reason – Robert Patrick – and I would watch it again because of him, he’s a great actor and a lot of fun to watch. He is, ultimately, the film’s saving grace.

Let’s start with the good. The film is entertaining most of the time. Amanda Crew plays Olive, an unemployed millennial, who listens to the advice of her friends and mom and, after losing her job and breaking up with her boyfriend, rents a home in the country to unwind for the weekend. The house is owned by Harvey (Robert Patrick), a widower and babyboomer. Harvey breaks the 4th wall throughout the film, ranting directly to the camera about millennials. These stereotypical rants provide much of the films comedy and are really enjoyable. We also get some comic relief from the scene’s involving Olive’s mother, Crystal (Kim Delaney) and her lover, Uriah (played by the very funny Johnny Pemberton from Superstore). Finally, we get a scene with Ray Wise that is entertaining in a way that only Ray Wise can be entertaining.

One of the places where the film falls apart is that it doesn’t really know what it is. Is it a horror film? A comedy? A thriller? Based on the comments of Bates, you would assume it is a horror comedy, but I would put it squarely into the thriller category. Harvey is clearly having a psychotic break and struggling, we get some very odd dream sequences just to remind us of this (something the film could have done without). There’s some gore and a few scenes that may cause the squeamish to look away, but I think the thriller classification better describes this film. In order to create more of a horror feeling, Bates adds scenes that would fit into a supernatural horror film, but don’t belong in the slasher that it feels like he was trying to make. Those attempted jump scares, which are really just the mental breakdowns of our two main characters, demonstrate how fragile they are but take away from the thriller aspect of the film.

The film has three clear acts in my mind. The first is the setup that establishes the characters and the second involves Harvey spying on Olive and beginning his killing spree. The final act is the home invasion. Although, is it really a home invasion when you own the home and are renting it out for the weekend? I feel like the movie could have dropped the aforementioned jump scares and creepy dream sequences and extended the third act (or given us more time with Crystal and Uriah) and it would have been a much better film.

At the end of the day, the film is worth seeing for Robert Patrick’s performance and the scenes between Kim Delaney and Johnny Pemberton. Amanda Crew was good, but those three cast members did an amazing job at selling their performances and bringing emotion onto the screen. I would like to give Bates credit for a number of the one liners that he gives to Robert Patrick’s character. Some of the things he says make you laugh and then feel bad for laughing at such a dark scene, so kudos for that. 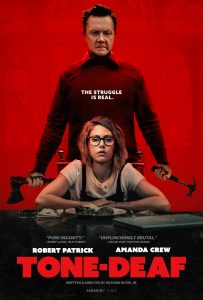 Movie description: After losing her job and imploding her latest dysfunctional relationship, Olive (Amanda Crew) flees the city for the weekend, escaping to the countryside for some peace and self-reflection. She rents an ornate country house from an eccentric widower named Harvey (Robert Patrick). Soon two generations collide with terrifying results as Olive awakens Harvey’s homicidal tendencies and is plunged into a blood-soaked fight for her life. More than your average slasher film, TONE-DEAF provides a dark critique of the bizarre cultural and political climate that currently exists.

It’s hard to describe how I felt watching BlacKkKlansman. I’ve been slow to write this review because I’ve spent the past month digesting it. When I first watched the film, I wrote down “Powerful, Dark, […]