The love story is at the heart of the film. I like mismatched couples, star-crossed lovers who carry the day in the end. The only thing that interests me is love stories, but I never thought I was destined to film one. People may be uncomfortable with Aline and Guy-Claude’s age difference or believe he forces her to work. But he has a vision for her and she is very ambitious.

At over 2 hours running time, I really wasn’t sure what I was getting into when I signed up to watch Aline. My wife, who acts as my editor, watches a lot of movies she’d rather not see in order to edit the reviews, so every now and then I pick a movie that I know will appeal to her. That was, to be completely honest, the only reason I was giving Aline a chance. I was, however, quite happy with the film and the time passed quickly because the film was so well done.

Aline is “a musical dramedy freely inspired by the life of Celine Dion.” Throughout the film they recreate iconic moments from Celine’s career and they do a fantastic job. At times, you think that you might actually be looking at a photograph or video of the singer rather than her portrayal on screen. That said, it is not officially a biopic and takes creative liberties to move the story forward. Either way, it is an enjoyable way to spend a couple of hours.

The film takes us through Aline’s life and this is where things get weird for me. Instead of hiring different actors to play Aline at different ages, she is always played by co-writer/director Valérie Lemercier. This works great once you get into the film, but the way they shot the scenes and the computerized de-aging that they performed on Lemercier to let her play a young Aline didn’t work out so well. There are scenes that could be described as creepy, but that is my only real complaint.

The only other aspect of the film that bothered me was that Victoria Sio was not featured more heavily in the credits. It actually took some effort to determine who was singing in the film, if it was Lemercier or if it was someone else. At times, my wife actually thought it might be Celine. It turns out the answer is Victoria Sio, a singer who should be given a lot of credit for the success of the film as she lends a lot of credibility with a voice that is very reminiscent of Celine.

Beyond that you have, as Lemercier said, a love story. The story of two people falling in love at ages that are, perhaps, slightly disturbing. It is, however, a wonderful story and it is filled with laughs and the occasional tear. I’m sure that many will want to treat this as a biopic, but I think it is important to see it as it is, a good story that is entertaining and was inspired by reality. Watching Aline and her husband throughout the years creates a lot of tender moments and I’ve found that films that span decades focused on a single couple can often tell incredible stories in a way that a movie spanning a few years can’t.

While I wish Victoria Sio’s name was presented in big letters at the start of the film as the real star of the show and I still question the decision to create creepy de-aged scenes, I did truly enjoy the film and I highly recommend checking it out.

Aline will be released in theaters on January 21. 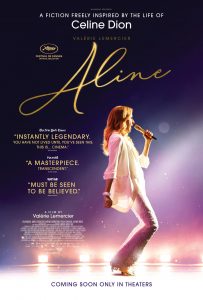 Movie description: The youngest of a hardworking French-Canadian couple’s 14 children is propelled to global music superstardom in Aline, a fictional musical dramedy freely inspired by the life of Celine Dion, written by, directed by and starring two-time César Award winner Valérie Lemercier. For Aline Dieu, nothing in the world matters more than music, family and love. Her powerful and emotional voice captivates everyone who hears it, including successful manager Guy-Claude Kamar, who resolves to do everything in his power to make her a star. As Aline climbs from local phenomenon to best-selling recording artist to international superstar, she embarks on the two great romances of her life: one with the decades-older Guy-Claude and the other with her adoring audiences.

Have you ever finished a movie and said, “Yep… that was a movie.” I feel like that could be the end of this review. The film was not very good, it felt like the writer/director, […]