Like most indie films, I was drawn to To the Stars by the cast. I recently watched Banana Split and thought that Liana Liberato was amazing. Similarly, Shea Whigham caught my attention in The Quarry. My wife and I are huge fans of Malin Akerman, who we’ll always remember from Trophy Wife and Jordana Spiro was the star of one of my favourite sitcoms, My Boys. Finally, you have Tony Hale in a small, but critical role that is the polar opposite of his role in Arrested Development. The only unknown to me was Kara Hayward as the lead character, Iris Deerborne, and she held her own and controlled the scene among so many actors that I enjoy, so I’ll be watching for more from her in the future.

I’m a sucker for a good coming of age story and that’s what this film is in every way. It is the story of Iris and Maggie, two completely different girls who find friendship in their differences, yet are drawn together by the fact that they both feel like outsiders. I think the friendship they form and the ride they take together is beautiful and a pleasure to watch. Iris comes into her own at the hand of Maggie, who is struggling to do the same. The tagline of the film is “It takes courage to find yourself” and I love that sentiment. Director, Martha Stephens, who shot the film beautifully, discusses how “yearning hangs like a fog over the central characters” and I think that’s the greatest summary you can find. She further says:

At some time, in some way, we’ve all known such feelings. Longing is part of the human condition: the ever-present awareness of what’s still missing from our lives. Metaphysical thinkers read humanity’s endless search for fulfillment as proof that we yearn for more than this world can provide. Scientists observe that the allure of seeking outweighs the pleasure of fulfillment, meaning that although we can attain some of what we seek, we’ll always find something new to yearn for.

I think that is what is great about this film, everyone in it wants something. Iris (Hayward) just wants to escape — to escape her bullies, her alcoholic mother, and sometimes, it seems, her own skin. Maggie (Liberato) is the new girl in town with an air of mystery, you can tell she’s hiding herself from everyone but it takes the film to find out why. Francie (Spiro), Iris’s mother, wants to relive her glory days… she got pregnant and married young, so she drowns her regrets with alcohol. In many ways, she reminds me of the role often filled by the high school jock reliving their glory days at a reunion in a slapstick comedy… a character you see as sad and pathetic. I actually found her hard to watch on screen and, as I mentioned, I’m a fan of Spiro, which indicates what a great actor she is.  Rounding out the female leads, you have Grace (Akerman), Maggie’s mother, who simply wants to take part in simple mother-daughter activities with her own daughter.

While the focus of this movie is clearly the women and they are all amazing. I do want to acknowledge Whigham and Hale. They both have relatively minor but important roles as counterpoints to each other. Whigham plays Iris’s father, Hank. He is quiet and withdrawn… to quote the director, he is “dull.” While he appears gruff and hard, you can see his love for his daughter, his desire for her to be happy. With minimal words and limited screen time, Whigham conveys so much. I commented in my review of The Quarry on what a great actor he is and this only reaffirmed that belief. Hale, on the other hand, plays Maggie’s father, Gerald, and I don’t feel his love for his family for the majority of the film (although he does have a moment of redemption near the end). While he does’t look as gruff and hard as Whigham, he portrays a sternness and coldness that is very off-putting. All of the cast performances were quite incredible.

I don’t want to spoil the story, but I will say that I loved it. I expect that it is very true to small town America in the 60s. I suspect it would be true of some small towns even now and that makes me sad. Don’t sit down and expect non-stop laughter with this film, but you also won’t spend hours afterwards crying. You’ll feel sad for some characters and happy for others, but, through it all, you get a really great story of friendship and love. My favourite part of the story is such a great reminder of that. Early on in the film, Iris wishes on the stars to disappear but as she find her place in this world and as things fall apart for Maggie, you see her wishing for her friend, pleading for her. That moment in the film sent chills down my spine. 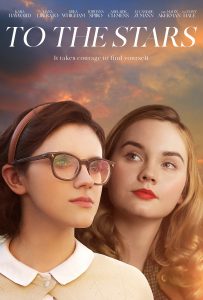 Movie title: To the Stars

Movie description: In a god-fearing small town in 1960s Oklahoma, bespectacled and reclusive teen Iris endures the booze-induced antics of her mother and daily doses of bullying from her classmates. She finds solace in Maggie, the charismatic and enigmatic new girl at school, who hones in on Iris’s untapped potential and coaxes her out of her shell. When Maggie’s mysterious past can no longer be suppressed, the tiny community is thrown into a state of panic, leaving Maggie to take potentially drastic measures and inciting Iris to stand up for her friend and herself.