As the credits rolled, my wife and I looked at each other and asked what we had just watched. Echo Boomers feels like it will never end. It’s not that it is a bad movie – it has more plot than other movies I’ve seen – it is just dull. If it wasn’t for the scenes with Michael Shannon, I suspect I would have fallen asleep. That’s probably getting ahead of myself, so let’s back up and start at the beginning.

Echo Boomers attempts to look at the way millennials are unfairly impacted by baby boomers being rich. It wants to justify them turning to crime against the wealthy because they are not wealthy. My wife and I are millennials by most definitions, but I prefer to believe myself to be a member of the Oregon Trail generation because I dislike the association with millennials. It is logic like that of this film that causes me to distance myself from the rest of my generation. The movie’s logic, premise, and reasoning are absolutely absurd.

The film itself is not necessarily bad. It has a strong cast in Michael Shannon, Alex Pettyfer, and Patrick Schwarzenegger… the supporting cast is pretty decent as well with a number of recognizable names and faces. Shannon, as I said in my review of The Quarry, could easily give a masterclass in acting. When he was on the screen, the movie was interesting because he so easily steals focus and could make reading the phone book interesting. Even the production quality is top notch… the movie feels every bit what a Hollywood blockbuster would be if it had a better script.

So, why is it so bad? The film posits that it is impossible for millennials to overcome their debt, find a job, and live a happy life therefore they must resort to crime… even good natured, moral members of that generation have no other choice. Apparently running up $100K in student debt and working for entry level salaries is not acceptable in the film world. There’s no acknowledgement that they made the choice to take on that much debt or that everyone in every generation has had to work. Then, when they resort to crime because there’s just no other possible way, instead of saving money or paying off debt, they use it to party and do drugs. I’m honestly not sure if the film was designed to show how hard millennials have it and that crime is the only choice, or to show that they are all entitled and lazy. In fact, one of the lines in the film is, “I did the math, it would have taken me 3 weeks and 2 days working those 12 hour shifts at an art gallery to make as much as what Jack had offered me after the first hit.”

Had the movie been satirical or a parody of that side of millennial attitudes, it would have been much more interested… but it wasn’t. It was a serious film, which the director’s statement only confirmed.

Here in 2020, it’s unbelievable how politically relevant this film is. It’s a timestamp of an extremely important period in our country’s history. It examines how being a product of your environment is directly connected to what a new generation deems appropriate; the decisions that one generation makes directly affects the next. The struggle between baby boomers and millennials seems never-ending but this film starts a contrastive conversation between the two.

The movie feels like it wants to steal Dom’s take on family from The Fast & The Furious and combine it with a typical heist movie and then fill it with social commentary, except that the social commentary doesn’t have a point and definitely isn’t the conversation starter that Savoy thinks that it is. Instead, you’re left feeling disappointed with the movie. I’m sure that there are people out there that will enjoy the movie, but the twisted and unrealistic attempt at social commentary took a mediocre script and made it painful. Personally, this was a 1-star movie for me due to the attitude of the film, but I feel it was mediocre enough to justify a 2.5 when you ignore that.

Echo Boomers is available in Theaters, On Demand, and Digital on November 13. 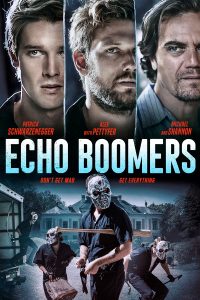 Movie description: Two-time Academy Award® nominee Michael Shannon (Knives Out) stars in this gripping crime-thriller filled with pulse-pounding twists and turns. A recent college graduate Lance Zutterland (Patrick Schwarzenegger) leaves school in debt, realizing everything he had worked towards was built on a lie. When he is pulled into a criminal underground operation, he finds his peers fighting the system by stealing from the rich and giving to… themselves. With nothing to lose, they leave behind a trail of destruction but with the cops closing in, tensions mount and Lance soon discovers he is in over his head with no way out.

Domino has all the pieces it needs to be a great film – Brian De Palma directing, multiple Game of Thrones stars in the cast, and a plot filled with terrorism and intrigue – all it […]