I was really excited when Dating Amber came to my attention. A film set at a secondary school in 1995 was intriguing to me as I spent the second half of the 90s in high school. I wasn’t sure what to expect out of the story because the film doesn’t have much of a synopsis, but I think the fact that it was so open-ended left the door open for the film to impress me. Colour me impressed, because I loved the film. I’m starting to think that Irish cinema might just be some of the best cinema around.

The film follows Eddie (Fionn O’Shea) as a closeted gay teenager from a military family. School is hard for him, but it seems like it is even harder for Amber (Lola Petticrew), who desperately wants everyone to stop calling her a lesbian. The solution… the two start dating. It satisfies their classmates and their parents and they get to avoid the verbal attacks they faced from their classmates. What they don’t expect is to find platonic love, a deep friendship that will likely last the test of time.

I started the film along side my wife who was only half paying attention (she’s not a fan of accents in films) but she was quickly sucked in. The film is tragic, comedic, and heartwarming. It is painful to watch how Eddie and Amber are treated, but then again that’s how society behaved in the 90s. It can be sickening to look back on, but I think that it is important that we do. At the same time the film is filled with so much comedy and so much love, that the end result is a very heartwarming story. I think it’s a story of hope more than anything else. At the end of the film, that’s the feeling I was filled with, but I won’t say why… I don’t want to spoil the story for you.

The film is a classic coming of age story, a genre that I want to say seems popular now but, if I think back, it has always been popular. I think the difference is that the people writing coming of age stories now are the same age as I am, they’re writing about a period of time that I remember because I was that age at that time. Dating Amber is an important story about where we come from and the struggles so many people face. As we (finally) talk about the importance of mental health in the world, I think stories like these are reassuring to others dealing with similar problems.

The film is my love letter to all those kids who felt different and needed to escape in order to be themselves. But while I was making this deeply personal story, I never realized how much the film would resonate with kids today. The outpouring of love, not just from older people, but teenagers, has been phenomenal.

While we may have come a long way, we still live in a straight world. These queer kids, struggling to come to terms with their gender and sexuality, are still everywhere. They are in every small town across Ireland, just as they are in America. They are there today just as much as they were there in the past. And they deserve to see their stories shaped by love and laughter. They deserve their own coming of age story like Superbad and Lady Bird.

Eddie and Amber mean more to me than any characters I’ve ever created.

One thing that I like about this movie is that it casts a wide net. If you grew up in the 90s, if you’re a struggling teen today, or if you just love amazing cinema… you should probably add this film to your watch list.

Dating Amber is available on Demand and Digital on November 10. 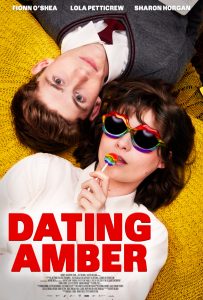 Movie description: A closeted gay teen and his lesbian counterpart pretend to be a couple to avoid suspicion.

Redemption Day was so much more than I expected it to be. I was drawn to the film because it starred Serinda Swan who I adored in both Breakout Kings and Graceland. I was surprised, […]