My wife and I sat down to watch If Not Now, When?  and we weren’t entirely sure what to expect. The trailer looked great, but the opening scenes to the film didn’t have the greatest actors and the quality of the film was pretty awful… it felt like we had signed up for a low-budget flop. Luckily, the quality was actually a problem with the stream and quickly sorted on my end. Also, the scene was just a flash back, so those actors were quickly gone and we were left with pros that executed a top notch movie. When the film finished, we looked at each other and said, “Wow, that was great!”

The film follows 4 high school best friends, 15 years later. They are all experiencing their own problems and they all need someone to support them. Deidre (Meagan Holder from the canceled-too-soon Pitch series) is divorced with a son. Suzanne (Mekia Cox who plays the amazing Nyla Harper on The Rookie) is pregnant with an alcoholic husband. Patrice (writer and co-director Tamara Bass) seems pretty happy, but remember that things aren’t always as they seem. Finally, Tyra (co-director Meagan Good) brings the group together when she overdoses and needs to see treatment.

I’m a big fan of Mekia Cox as The Rookie is one of my favourite TV shows, but I’ll be honest, I didn’t instantly recognize her. It felt like she was taller than she appears on TV in this film, but I’m assuming that was just due to not standing next to Nathan Fillion. Her and Meagan Holder had the most interesting storylines in the film and seemed to carry a bit more of the on-screen weight than the other two. I’m sure that many people will see themselves in Tamara Bass’s character and that a lot of families can relate to Meagan Good’s character, but their roles felt slightly diminished. I suspect that is because they were also directing the scenes, which made their jobs much more difficult.

For us, this film represents more than just a chance for Black actresses to play lead roles, side by side; it represents a shift in storytelling. If we can break through the barriers of only being seen in a particular light, we believe we have the ability to change the way our stories are told from here on out. And while we understood this journey was filled with lofty ambitions, we knew that we possessed the skills, determination and drive to make that goal a reality. The end result is a film filled with a lot of love, heart and a love letter to our sisterhood.

That final sentence summarizes this film more poignantly than I ever could. The relationship these women shared on screen is a friendship we all seek to have. The love and support they showed for each other is something we all want to find. They created on screen magic that was a joy to watch and so much more than I expected from a film that I hadn’t heard of before it showed up in my inbox.

That’s something that’s worth mentioning. So many indie films slide under our radar because of a lack of promotion. I’ve seen so many movies that I’ve come to love simply because the screener showed up in my inbox. These are movies that seldom make the top of Prime Video or Apple Movies, they are typically hidden in sections that people seldom browse. So, while I highly recommend watching this film this weekend. I also recommend giving a random indie film a try. Just pick something from a genre you adore and check it out.

If you’re looking for something to watch this weekend check out If Not Now, When? You may find yourself inspired to reach out to an old friend, dust off a relationship that you’ve let fall by the wayside during the pandemic, or just talk to a loved one to see how they’re doing. The more I think about this movie, the more I think about just how beautiful the story was.

The film was released in Theaters, On Demand and Digital on January 8.

If Not Now, When? 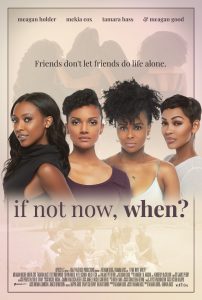 Movie title: If Not Now, When?

Movie description: Four friends, who met in high school and are bonded by an event, are suddenly forced back together when one of them suffers a crisis. It’s a story of love, forgiveness and the incredible bond between women.

Truffle hunters will camp out on their porches at night, shotgun in hand, to fend off competing hunters trying to steal their valuable pigs and dogs. What? That was one of those facts that felt […]