When the opportunity to review Banana Split first came up, I had to think about it… for about a second. I love coming of age stories, late night comedies, romantic comedies, and buddy movies. I don’t know that this movie falls into any one of those categories completely, but it definitely touches all of them. The writers, Hanna Marks and Joey Power, wrote something absolutely incredible and director Benjamin Kasulke brought something amazing to the screen in his first feature film. This shouldn’t be a surprise given he was the Directory of Photography for movies like Laggies and Safety Not Guaranteed.

The film is filled with great actors. Hannah Marks (April) and Liana Liberato (Clara) are unstoppable. I’ve already searched out other films from these two actresses to add to my watch list. I was in awe of their performances. Similarly, Dylan Sprouse (Nick) and Luke Spencer Roberts (Ben) did great jobs. I really enjoyed Luke in The Package, so it was great to see him show up in another film. Dylan may have been the weak point of the film for me… his acting was good and he actually made his character unlikable  a number of times. Sometimes actors struggle at making you feel like they are a dick, but there are times, particularly when he throws a punch in a later scene, where you really believe it. I think the problem is that he’s a twin and his brother is on a popular TV series and is a stellar actor. It’s like when Casey Affleck started acting, and you expected performances that matched the calibre Ben Affleck and they just weren’t there. I feel like it must be worse for Dylan because he and Cole are twins. That said, he still did a great job, it just didn’t quite stand out next to the rest of the cast’s performances.

The concept of the film is interesting. The movie starts off with a very rapid overview of April and Nick’s 2 year relationship, from first kiss as friends to sobbing breakup. We then follow a very melancholy April in her life after Nick, which includes learning that Nick is dating someone new – Clara. Clara and April ultimately meet and end up having a lot in common, forming a friendship – albeit an odd one given that it involves Nick’s former and current girlfriends. At this point, Nick takes a backseat in the film as we explore the friendship between Clara and April with the help of Ben, who is friends with all three of our triangle members. I loved watching the friendship between Clara and April grow and I loved Ben’s part in all of it. It was a cute, fun, happy movie – in other words, it is exactly what the world needs right now.

I think this movie shows us that we can find friendship in the most unlikely of places at times when we aren’t looking for it, that life is difficult to navigate for teenagers, and that powerful friendships can withstand ups and downs. Personally, the movie was a whole lot of feel good exactly when I needed it while still being an entertaining and compelling story. I can’t recommend this film enough. It is available on demand and digital today. 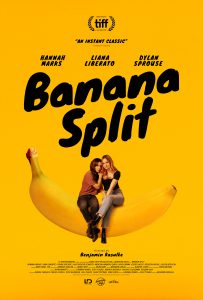 Movie description: April (Hannah Marks) has spent the last two years of high school in a relationship with Nick (Dylan Sprouse), from first frantic make-out session to final tear-stained breakup. In the aimless summer between graduation and college, the newly single April mends her heartbreak by striking up an unexpected friendship with an unlikely candidate: Nick’s new girlfriend, Clara (Liana Liberato).