I really wasn’t sure what to expect going into Groupers. The movie starts with a pair of title cards, “Grouper: A person who changes gender or sexual orientation later in life…” and “It’s also a bottom-dwelling fish.” The next thing you know, you’re thrown straight into an abduction as Meg (Nicole Dambro) leads Brad (Peter Mayer-Klepchick) and Dylan (Cameron Duckett) into the back of a van. This movie, labelled a dark comedy, takes you on a wild roller coaster ride of revenge that doesn’t always make sense but keeps you entertained.

We tend to think of most films has having three acts. This film is more of a series of vignettes from the view of each main character. The first 30 minutes setup the backstory from the viewpoint of Meg. If we were in English class and talking about dramatic structure, we’d probably call this exposition. This was, without a doubt, my favourite part of the film. It was so simplistic, Brad and Dylan are tied up in a compromising position, while Meg tells them a story and explains their situation. Nicole Dambro is a rock star here. I was beyond impressed with her and wish that the stylistic choices made for this first third of the film could have continued until the end. I could have watched Meg sit and pontificate to the camera for the entire film and walked away very happy. Dambro was born to take centre stage and shine and I look forward to seeing her in more things moving forward, I’ve never felt so captivated watching someone just talk to the camera.

The film then cycles through each of the characters. We spend time with Brad and Dylan and see their viewpoint of the same events. We get one more reset and cycling of the events from the viewpoint of Orin (Jesse Pudles), Meg’s brother. With this final review of the events from a different viewpoint, we move forward and meet additional characters like Talkie (Brian Ioakimedes), one of the more interesting characters I’ve seen in a film, Frank (Max Reed III) and Hank (Travis Stanberry), and Durant (Terrance Wentz). They extend the story in a way that I didn’t see coming. Everything I read about the film before watching it covered about the first 30 minutes. After that point, I felt like I was in uncharted territory. It was not the film I expected,but it was still enjoyable to watch.

For those of you not sure what to expect… let’s set this up for you. You have two bullies that constantly harass a gay student. His sister, currently a post grad, decides to ask the question behind the age old debate for her thesis, “Is being gay a choice?” It’s 2019, which makes that question seem ridiculous, but unfortunately not everyone feels that way. She rigs up the two bullies in a series of harnesses that includes a variation of the Chinese finger trap (although no fingers are involved). She then suggests that if homosexuality is a choice, as the two bullies claim it is, that they can choose to be attracted to each other. This is, of course, all in the interest of completing her post grad work and has absolutely nothing to do with revenge for their bullying… he wrote sarcastically.

The film definitely has comedic moments, but there’s also a good chunk of drama in the film. Casting wise, the film has some high points including Dambro, who I mentioned previously, and Wentz, whose Durant is an interesting and complex character. There are also a few mediocre points… I wasn’t overly impressed with Mayer-Klepchick, Duckett, or Pudles, although Duckett’s Dylan improved over time.

At the end of the day, I think there’s a large portion of the audience that will most likely not enjoy this film or question what they are watching, but I think this movie has what it takes to become a cult classic. If you aren’t looking for your typical mainstream movie, you might find something you love with Groupers. Similarly, if you want to amazing acting, watch the film just to see Nicole Dambro, while the film concept was interesting, I think she made the movie. Check it out in LA today and in wider release on October 3. 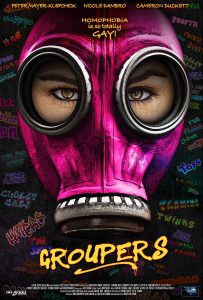 Movie description: Two all-American, homophobic high school bullies are kidnapped, drugged and awaken tied up face to face in an abandoned pool. Absurdity and insanity ensue as we learn that a seductive grad student is behind the kidnapping and plans to perform a psychological and somewhat sadistic experiment on them. A string of outlandish characters, including a one-eyed street thug and a philosophical squatter get caught up in this odd tale of revenge while bringing their own, ambiguous motives (and opinions) to the party as they pontificate whether homosexuality is a choice.