Those are probably the three words I would use to describe Rent-A-Pal. It is a wild 109 minute ride that is completely unexpected. When we finished the film, my wife described it as “Different.” I said, “but it was actually really good, it held our attention.” She replied with, “Definitely good, just different.” This days, I use my wife to judge films. A lot of the time, films that intend to be intense simply aren’t. My wife is easily distracted and doesn’t get sucked into films the way I do, so watching her can be a good indicator of the success of the intended intensity. In the case of Rent-A-Pal, the filmmakers exceeded every expectation that I had for such a low budget film. My wife was locked on the TV, leaning in, hand over her mouth, butt firmly planted on the very edge of the couch. There were, to my surprise, even audible gasps at the on-screen action. Those gasps are typically reserved for a very small set of films that are the best of the best. So, if my wife is any indication, this film may be among the best of the best.

While I am usually more easily impressed, I had high expectations for this film based on the involvement of Wil Wheaton. I’m sure my running list of people I’d like to have a beer with is exceedingly long, but Wil is definitely on that list. My expectations were met and, based on other thrillers I’ve seen recently, exceeded. This movie blew me away. When it ended, I just sat there in awe… I didn’t even have an initial reaction to the films conclusion… or rather I did and that reaction was to sit with my mouth hanging open looking at my wife questioningly.

I think there are three areas that we need to call out and discuss with this film.

First, the set and effects. The film looks amazing and reading the production notes afterward, I realized why. They found a house that had been abandoned for some time and were given free rein over the items inside. My wife and I were constantly pausing the film to admire many of the vintage elements of the set. It was clear that so much time and energy went into lovingly recreating one of the greatest periods of our history, the early 1990s. The effects also impressed me multiple times. The entire interaction with Andy (Wil Wheaton) is very impressive and reading the production notes once again revealed how much effort was put into getting that right. I’ll reiterate my belief that production notes should be distributed more freely and publicly. Additionally, the lighting and use of multiple televisions, especially as the film draws to a conclusion, brings everything together and really heightens the experience. Finally, I want to point out the internal shots of the VCR, those were some of the most memorable shots for me, I loved seeing that up close.

The second amazing aspect of the film is the cast. You have a consummate professional in Wil Wheaton, so you already knew there were good casting choices made, but the rest of the cast brings it together in an amazing way. Brian Landis Folkins plays our protagonist, David, in the perfect way. He is the ultimate cross between a character you pity and a character you respect, and he plays both sides very well. Kathleen Brady is entirely convincing as Lucille, David’s mother. I want to call her performance magical because it is, but the character she plays is anything but. Finally, you have Amy Rutledge as Lisa. It was interesting to learn that Amy earned the role following a nationwide casting call to submit a 90’s style video dating tape as the audition video. It’s an amusing way to cast a role (and the perfect way for this film). Also, Amy is great in the role.

Finally, you have writer/director Jon Stevenson. The film is brilliantly shot and, based on the production notes, that was a group effort, but you know that Stevenson played a big role in the final product. Additionally, you have to appreciate the script. It is so well done, so captivating, that it is impossible to stop watching. It’s like watching cars drive past an accident, every single person turns to look and see what happened. That’s what this movie is… a tragic event that no one can turn away from. This is a great thriller that will keep you glued to your seat and we have John Stevenson to thank for that.

Rent-A-Pal is available in select theatres and on VOD on September 11. 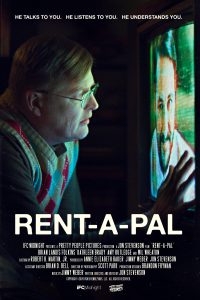 Movie description: Set in 1990, a lonely bachelor named David (Brian Landis Folkins) searches for an escape from the day-to-day drudgery of caring for his aging mother (Kathleen Brady). While seeking a partner through a video dating service, he discovers a strange VHS tape called Rent-A-Pal. Hosted by the charming and charismatic Andy (Wil Wheaton), the tape offers him much-needed company, compassion, and friendship. But, Andy’s friendship comes at a cost, and David desperately struggles to afford the price of admission.

I knew that I had to watch Satanic Panic as soon as I saw the cast list. Jerry O’Connell has been a favourite of mine ever since I saw him in Stand be Me and […]

After I finished this film, I had to let it stew in my brain for a couple of days… I wasn’t quite sure what to make of it and, to be honest, I’m still not. […]