When I turn on a horror movie, I’m not looking for much other than to be scared and entertained. The Shed eventually succeeded in providing both of these elements, but it was trying at times to keep watching. They say that when you are providing negative feedback, you should use a compliment sandwich – saying something positive before the negative and following it up with more positive. Ultimately, the film provided its own compliment sandwich. It started strong and finished with an awesome battle, but the middle dragged a little longer than I would have liked. I was intrigued enough to keep watching to see where the film went, but I was also wondering about some of the choices that were made.

When I first read the synopsis of the film, I, incorrectly, assumed that it would be a horror comedy. I was expecting that the movie’s main characters, Stan (Jay Jay Warren) and Dommer (Cody Kostro) would appear in roles similar to Simon Pegg and Nick Frost in Shaun of the Dead. This expectation was quickly corrected when I watched the trailer, but I had already gotten my hopes up. I feel like a horror comedy about two bullied teenagers who find a vampire in their shed writes itself and I’m now super-excited to see someone release such a movie.

I think where I disconnected from this film, is that I wanted mindless fun and the director and producer had a statement to make, commentary on today’s society delivered via a horror movie. After spending 48 hours digesting the film, I can see their statement in the film, but when I sat down to a horror movie, it wasn’t what I was expecting or in the mood for. The slow second act of the film makes a lot more sense when you consider this goal. I don’t really want to talk about that though, let’s talk about what I really liked about the film.

The film opens with a really different sequence. It was 100% unexpected and I was caught completely off-guard when a scene transition happened. The opening can only be described as “f’ed up”, which I think that appropriately captures it. As messed up as this scene was, I really enjoyed how it was done and how unexpected it was – it was definitely one of my favourite parts of the film. After the opening scene, we get a look into Stan’s life. It’s not a great life in a number of ways. We also start to meet other members of the cast and learn how they are all interconnected. I think that two characters I would have written out of the film are the sheriff and her deputy, the sheriff plays a key role in progressing the story, but I found both to be unbelievable and annoying.

In the middle of the film, we encounter the vampire and get some early kills. This is where we get some “movie stupid”, things that people do that just don’t make sense in order to progress the movie forward. Stan is paranoid and worrying about his situation and this entire part of the movie felt very long and drawn out. It was used to further establish a few of the characters and show us personality differences, but I found myself frequently puzzled by actions that were taken.

The third act of the film involves Stan and Roxy (Sofia Happonen in her feature film debut) in an epic battle, defending a locked down house from the vampire. I actually thought this battle was really well done. I loved the way it played out, the tools that were used, the fight scenes. It was during this portion of the film that I found myself shifting positions to the edge of the couch, eager to see what would happen next. There are a couple of scenes (one involving a thrown knife) that had me laughing out loud. I’m not sure if that was intentional or not, but I thought this entire sequence was a lot of fun. The movie concludes with one unanswered question (or I missed something), that I would love to see answered. I’m not sure if they are planning a sequel to The Shed called The Trunk, but I’m curious to see if they do.

At the end of the day, you have a film with a really original opening scene and a fantastic third act. If you’re a fan of vampire films, I would say that you should check this one out based on that alone. I also think this film would be a great addition to the Shudder line-up and, if it ends up there, I think everyone should add it to their watch list. Check it out in theatres and on demand and digital today. 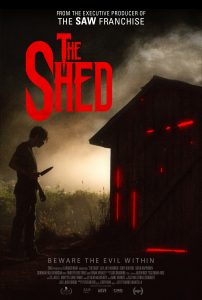 Movie description: Stan and his best friend Dommer have put up with bullies their entire lives. All of that changes when Stan discovers he has a murderous vampire living in his shed. Seeing the bloodshed and destruction the monster is capable of, Stan knows he has to find a way to destroy it. But Dommer has a much more sinister plan in mind.