All Hail the Popcorn King was a complete surprise to me. I thought I was sitting down to watch a documentary about the author of Bubba Ho-Tep. I was, but I was also watching a documentary on one of the most amazing authors that I had never heard of. My bookshelves are littered with books by some of my favourite horror authors – Stephen King, Dean Koontz, and Christopher Minori – yet I had never encountered the name Joe R. Lansdale. Admitting to that feels like a sin, but at the same time I have redeemed myself with numerous Kindle purchases since watching the documentary. This film was also a first for me because I was able to sit down and spend 30 minutes geeking out with the brilliant director behind the film, Hansi Oppenheimer.

For those that don’t know Joe, let’s talk a little bit about him. He’s been publishing his work since 1981 and has written over 60 novels. He’s also written for comic books and their related shows (including well known characters like Batman and Jonah Hex). His work has been translated onto both the big and small screen with movie adaptations of Bubba Ho-Tep, Cold in July, and others as well as the Hap and Leonard TV series. He was involved in the creation of the Horror Writers Association and, most surprisingly to me, Shen Chuan, his own martial arts style, which has earned him a place in both the US and International Martial Arts Hall of Fame. The documentary feels like a real introduction to the man and, while I went in experiencing the film adaptation of one of his books, I walked away a fan.

One thing that struck me was the people participating in this documentary – Bruce Campbell, Joe Hill, Don Coscarelli, Amber Benson, James Purefoy, and many more. Speaking with Hansi, she shared that Joe was able to make the connections to get some of those big names involved, which is really awesome because they added a lot of unique voices to the film. It’s pretty clear from the film and from my research into Joe after seeing it that he’s touched a lot of lives and made a big impact in a lot of ways. Another thing that stood out to me was his passion. His love for him home, his family, and his work comes across throughout the documentary. He’s found something that makes him happy and that happiness just shines. In some ways, I found his passion very similar to Hansi’s. Both in the film, and when we spoke on the phone, her passion came across in such a powerful way. We may have only spoke for 30 minutes, but being a pop culture nerd myself, I feel like we could have chatted for hours. I also thought it was great that she referenced Liquid Sky, a film I recently learned about while watching Time Warp: The Greatest Cult Films of All-Time Volume 2 – Horror and SciFi.

I was a little intimidated when I talked to Bruce.

He’s not in it for the celebrity. He really loves writing. He gets up and writes three hours every day. One day, it was my last day in Naga. I said, “Can you get up early cuz I want to do this shot.” I said, “Oh but I don’t want to interrupt your writing time.” He goes, “I’ll just get up earlier.”

I think that sentiment sums up my take away from the documentary. Laid back, relaxed, and enjoying life… that’s about the best way I can think to describe the amazing, yet humble writer at the centre of the documentary. I highly recommend checking out All Hail the Popcorn King if you get the opportunity. The film doesn’t have a distributor yet, but hopefully it’ll be coming to a theatre or streaming service near you. Hansi and I discussed how it would be a great addition to a streaming service like Shudder and I really hope that they stumble across it and pick it up because it would be a perfect fit.

All Hail The Popcorn King 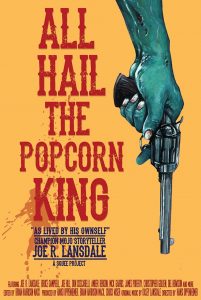