I held off on watching Sicario for a long time, waiting until a sequel was announced and I could stream it on Netflix. I’m typically not a fan of Benicio Del Toro and, for that reason, shied away from seeing the movie. Sicario had enough actors that I am a fan of (Emily Blunt, Josh Brolin, Victor Garber, Jon Bernthal, and Jeffrey Donovan) that I was willing to give it a go, and I rather enjoyed the movie and Del Toro’s performance was amazing. The move was good enough that I was excited for Sicario: Day of the Soldado and almost went to see it in theatres. Instead, I waited to rent the movie and finally watched it tonight. It was not a worthy successor to Sicario.

The first issue is likely my fault and I leave it here as a warning, it’s also why I gave the film two stars as Cerebral Cinema, there are a lot of subtitles. I’m not anti-subtitle and enjoy a good foreign film, but I rented the movie as I was sitting down to eat dinner and I don’t find that subtitles mix well with dinner time. The bigger issue, however, was the first 30 minutes of the film – the setup took forever. When you’re working with 122 minutes, taking 25% of that time just to setup the story becomes a little cumbersome. It didn’t feel like a first act to me… instead, it felt like a prelude to the first act. The middle of the movie was decent, which is why I bumped it up to 2.5 stars, but the ending fell a little flat, although they very clearly opened the door for a third movie.

From a highlight standpoint, it was Jeffrey Donovan. His character provided some entertainment in the first movie and, while he didn’t offer as much this time around, he was one of the best parts of the film. I am, of course, biased because I think that Jeffrey Donovan and Matt Bomer would make the greatest buddy cop TV series of all time. Isabela Moner (as Isabel Reyes) and Benicio Del Toro had some great scenes together. Over all, the movie lacked fun action and was, instead, filled with a few fire fights and the odd explosion.

The concept of the movie was also interesting – drive the cartels into a war, no matter the cost. It fell apart a little in the middle and I found myself questioning why certain actions occurred. Ultimately, the goal of these scenes was to drive the plot to the conclusion but this felt less like a stand alone movie and more like the setup for an ongoing series. When I watch a film, I want a clear start, middle, and end. I don’t want to have to guess at the conclusion, I don’t want to feel like I’ve been given part of the story. This was how the movie felt. It jumped around and felt disconnected. My hope is that there is a lot of missing footage and we get a director’s cut with the gaps filled in.

I wouldn’t recommend dropping money on renting this film. Instead, wait for it to show up on Netflix or another streaming service. Even then, unless you are a Del Toro fan or are excited about the prospect of an ongoing Sicario series, I would suggest that this is a weeknight filler movie rather than a Friday night, pop a bowl of popcorn and settle in for some entertainment film. 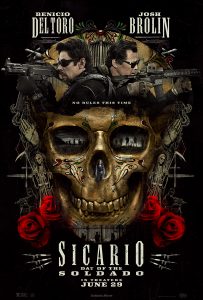 Movie description: In SICARIO, Day of the Soldado, the series begins a new chapter. In the drug war, there are no rules – and as the cartels have begun trafficking terrorists across the US border, federal agent Matt Graver (Josh Brolin) calls on the mysterious Alejandro (Benicio Del Toro), whose family was murdered by a cartel kingpin, to escalate the war in nefarious ways. Alejandro kidnaps the kingpin’s daughter to inflame the conflict – but when the girl is seen as collateral damage, her fate will come between the two men as they question everything they are fighting for.

Sometimes you come across a movie that you want to watch two or three times to ensure that you fully understand it. I watched the movie and I wondered if I was really prepared to […]