What did I just watch? I’m not sure if it was a comedy, a drama, or a romance. Do we call it a Rom-Dramedy? Whatever it was, it was an enjoyable film that I normally would have overlooked. The film is light at times, but it’s also deep. It’s a rollercoaster ride that had me laughing and crying, happy and sad. So, what is the film, who is in it, and why was it so interesting?

The movie tells the story of Godfrey (Nick Thune), an interesting and unique character with a million and one identities, but seemingly no substance. Our protagonist, Sara (Cleopatra Coleman), is a best selling author experiencing writer’s block at the worst possible time – she owes pages to her agent, Kelly (Iliza Shlesinger). When Kelly drags Sara out, she spots the then unnamed Godfrey portraying multiple characters. She finds it odd and tries to learn more about him, but he disappears. She later encounters him again, this time as a singing cowboy busking on the boardwalk. She approaches him and gets invited to an event he is attending. The next part of the movie is a whirlwind of eccentric activities and conversations. Then, we start to learn more and that’s when the movie gets to be really interesting.

I won’t go beyond that, but I do want to talk about the cast because they were incredible. Shlesinger was the perfect high pressure book agent… I don’t know if anyone could have portrayed the role better. The stars, however, are who I really want to talk about. Coleman was a wonder on the screen and kept me spellbound. Even when Sara made mistakes, it was hard not to love the character because of the energy that Coleman brought to her. Nick Thune was incredible. He played so many characters, portrayed so many emotions, and gave one of the best performances that I’ve ever seen. His performance can only be described as intoxicating… it was purely magical and one of the best performances I’ve seen in a while. I recognized him from a few episodes of Love Life, but given the performance I’m surprised I haven’t seen more of him… I certainly hope he gets more roles moving forward because I’d love to see more of him on screen.

I think that Thune is why the film is so interesting. Coleman and Shlesinger are incredible and add so much humour when they are together, but it is Thune that brings the movie to life. The character’s story, his behaviour, and the way he is brought to life is incredible. I’m sure a lot of that credit belongs to writer/director Ken Mok. He wrote an incredible story with amazingly complicated characters, but the actors really came together to bring it to life. I’d love to see this film in the running for multiple awards, but I feel like this will fly under most people’s radar. If you get the opportunity, you definitely need to watch this film.

The Right One will be available in Theatres and On Digital & Demand on February 5. 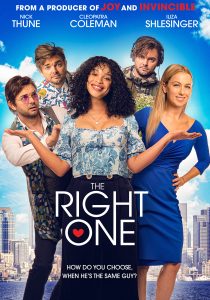 Movie title: The Right One

Movie description: In this heartfelt and hilarious rom-com, Sara, a novelist struggling with writer's block, needs inspiration — and finds it when she serendipitously meets Godfrey, a down-on-his-luck oddball who constantly changes personas and alter egos in order to cope with his past and avoid reality. Just as Godfrey begins to open up to Sara, he discovers that she’s been using him as inspiration for her next novel, and he vanishes from her life. Did Sara just lose the man of her dreams, or will she be able to find him and make things right?