I was intrigued by Buttigieg. He had a remarkable composure, evident intelligence, and a gift for conveying complex ideas in ways that felt graspable. But could his underdog campaign possibly be successful? Could a small-town mayor ascend, in one bold leap, to the highest office in the land? It was a story that Frank Capra might have concocted.

Mayor Pete was an intriguing and highly entertaining documentary. I went in not knowing a lot about Pete Buttigieg, including how to pronounce his last name. Thankfully, the documentary cleared that up right away and also introduced me to one of the more interesting political figures that I’ve seen. The film takes you behind the scenes into Buttigieg’s campaign – looking at both his personal and public life. Perhaps this should have been streamed in real time and all politicians should be required to have cameras capturing every moment of their campaign. It might make for more interesting elections or, at the very least, more interesting election cycles.

Right off the bat, I have to commend Buttigieg and his husband for agreeing to this documentary. The leap from mayor to presidential candidate must have been difficult, but executing while your behind the scenes actions are being documented would only increase the difficulty. At the same time, for me, as an outsider looking in, the documentary really highlighted how a campaign team can make mistakes. Those mistakes were my biggest takeaway from the documentary.

Buttigieg is well spoken, warm, and inviting. When he speaks, you hear passion, you hear conviction, and you hear heart. Yet, as you watch the documentary, at every turn, people say that he communicates without emotion. From his rivals to the media to his own team, they are constantly correcting him and redirecting him. I feel like his words lost value between rehearsals, where he spoke from the heart, and the actual speeches, where his team had tuned them to remove all emotion. I feel like I would like him less if I was basing my opinion solely on public appearances.

Pete was rapidly emerging as a credible candidate. His fundraising strength, unique personal story (Rhodes Scholar, rust belt mayor, veteran, gay), combined with a resonant message built around the South Bend turnaround, and media fluency, catapulted him to the top tier of the 20-candidate field.

It was interesting to see Buttigieg’s candidacy unfold behind the scenes. He checked so many boxes, but at the same time faced so much hatred. Yet, he took everything with a smile on his face and a positive outlook that was impressive. I wish I could have his outlook because he seemed so upbeat, as if it would be impossible to bring him down. Everything he did was respectful, with one exception. There’s a moment where Buttigieg was to appear on stage and his husband points out that every other candidate has their family with them. Their plan is for Chasten to join him at the end, but not to be at his side the entire time. My take away here was that this really hurt Chasten, you could see and hear the disappointment and I think that Buttigieg missed that. It was a minor thing and hardly worth calling attention to, but I wanted to point out that this was the only moment where I doubted that Buttigieg is an incredible man.

Of course, we’ll never know what was left on the cutting room floor or how interested director Jesse Moss was in casting Buttigieg in a positive light, but we got a pretty intimate behind the scenes look and none of the moments felt staged. I feel like we got honesty in the film and I really enjoyed it.

Mayor Pete will release on Amazon Prime Video on November 12. 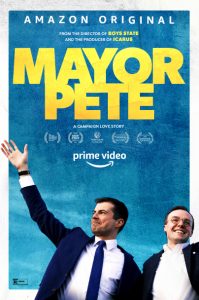 Movie description: Mayor Pete brings viewers inside Pete Buttigieg’s campaign to be the youngest President of the United States, providing an unprecedented intimacy with the candidate, his husband Chasten, and their ambitious team. From the earliest days of the campaign, to his unlikely, triumphant victory in Iowa and beyond, this film reveals what really goes on inside a campaign for the highest office in the land—and the myriad ways it changes the lives of those at its center. Recently appointed U.S. Secretary of Transportation, Buttigieg serves as the first openly LGBTQ Senate-confirmed Cabinet member in U.S. history.