When I first saw Groundhog Day, I thought the concept was rather entertaining… plus the film featured Bill Murray. The idea of a time loop is not new and has been used plenty of places. For me, one of the most memorable, other than Groundhog Day, would be the Cause and Effect episode of Star Trek: The Next Generation. My wife and I recently watched Palm Springs and enjoyed the use of it there as well, but I think that The Map of Tiny Perfect Things handles the time loop trope in a way that I found really enjoyable.

When the film starts, we encounter Mark (Kyle Allen), who appears to be psychic – as he knows exactly what is going to happen. This creates for a really interesting opening scene that is a lot of fun to watch. Eventually, we learn that he is stuck in a time loop and living the same day over and over again. Eventually, he realizes that there’s another person who is out of place, Margaret (Kathryn Newton), and he searches for her so that they can share the time loop together.

One of my favourite things about this film is that it features Kathryn Newton. She’s recognizable from Big Little Lies, but where I really know her from is Freaky and her performance there was outstanding. She brings that same amazing performance level to The Map of Tiny Perfect Things. While Allen was also good, I feel like it was Newton that made this movie.

I think that tackling the film from the teenage perspective was a great idea, and that credit goes to Lev Grossman who wrote the short story the film is based on as well as the screenplay. It is really interesting to see teenagers stuck in a time loop. Yes, you have unlimited time to do what you want but you’re a student and you’ll miss a lot of firsts. The film looks at that as we see contrasting opinions from the characters. Add that unique take, along with the attempts to escape the loop, and a mystery that surrounds Margaret and you get a really good film.

While you have a fantasy film that draws from drama, romantic comedies, and more, you also have a film that looks at introspection, our desire to stop time, and making the most of the time we have. The presentation of these concepts is, at times, astoundingly beautiful, and I think they will resonate with viewers of all ages. I also love the concept of Tiny Perfect Things… these little moments of magic that are all around us that we miss because we’re caught up in the bustle of everyday life. The smile on the faces of an elderly couple, clearly in love after so many years, a rare sighting of a majestic creature, and all the other little things that we don’t see as we rush around.

To me that was the part of the film that I took away with me. To perfectly present a picture of how important the time we have is from the eyes of those with the most time still ahead of them was picture perfect. It hit home and was equal parts depressing and uplifting. When I started writing this review, I had given the film 4-stars, but as I wrote it, I realized that the film impacted me more than I initially realized… it changed my perception much like the recently released Bliss did, and, for that reason, I had to up this film to 5-stars as well.

The Map of Tiny Perfect Things was released worldwide on Prime Video on February 12. 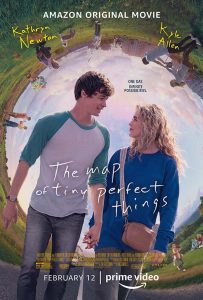 Movie description: Quick-witted teen Mark (Kyle Allen) is contentedly living the same day in an endless loop when his world is turned upside-down by the mysterious Margaret (Kathryn Newton) also stuck in the same loop. What follows is a love story with a fantastical twist, as the two struggle to figure out how — and whether — to escape their never-ending day.