I was 9 years old when the largest hostage rescue operation in American history happened. It took place on April 4, 1991 in Sacramento, California when 4 gunman took hostages at a Good Guys! electronics store. The film, A Clear Shot, is based on this true story. I don’t remember hearing about this event as a child, so I had to do some background reading to fully understand what happened. After reading the Wikipedia article, a news story, watching a news clip, and watching this film, I feel that I have a decent understanding and it appears as though the movie represents the big events relatively well.

Since the film is based on a true story that I suspect many my age have not heard about, I want to limit the details that I share about the story and instead talk about the film. First off, I want to say how impressed I was with the production quality. Across the board, this film was well produced. I went in expecting something shot on iPhones with the horrible audio quality I’ve experienced with several indie films of late. Instead, it is a very polished production and the audio quality is some of the best that I’ve heard. So, a quick shout out to sound mixer, Ricardo Carreno. Even when the gunfire started, I didn’t feel a need to turn down the volume and I wasn’t deafened, instead everything was clear and consistent.

Additionally, we need to talk about the cast. More and more indie films are drawing people in with one or two instantly recognizable names. This film didn’t have that. Mario Van Pebbles has a lot of star power, he’s acted in or directed a number of well known films, but his name isn’t as recognizable as it should be to the typical casual movie watcher. It was, however, enough of a reason for me to want to check out the film and I’m glad he drew me in. Everyone involved in this movie did an amazing job. I felt for the hostages and, at times, I even felt for the hostage-takers, everyone did an amazing job of portraying their characters on screen.

Finally, Nick Leisure needs a lot of credit for writing and directing this. It may not be a shot for shot representation of the events of April 4, 1991, but it tells the story, it evokes emotion, and it is well put together. Nick did a great job with the direction – there are moments of intensity, moments of horror, and moments of great emotion. The film looks at the difficult life of immigrants, the impact of a single bad decision on the lives of so many, and the various types of police officers from the good to the bad.

At the end of the day, the film is a decent watch. It is, however, based on a true story and that may make it a painful watch. I grimaced watching the conclusion of the film and, in researching news stories on the topic, saw the actual footage. There are definite similarities between the film and the actual event, so be warned going into this that it is definitely grim.

A Clear Shot is available on DVD and Digital on June 2. 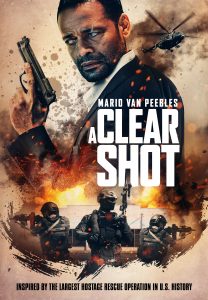 Movie description: An electronic store erupts into chaos as four gunmen storm the premises. Rick Gomez, Sacramento Police Departments’ top negotiator, realizes he needs to talk down the gunmen and keep everyone safe, all while juggling government politics. The gunmen leader doesn't want to hurt anyone, but his brother is a different story. A peaceful surrender quickly turns this sleepy city into a national tragedy.