In 2006, we were introduced to Borat (Sacha Baron Cohen), a Kazakhstan reporter sent to America to create a documentary on how amazing the country is, in the film Borat: Cultural Learnings of America for Make Benefit Glorious Nation of Kazakhstan. The film blended scripted moments with unscripted interviews, a style for which Baron Cohen is famous. The idea being that the unscripted portions are interviews setup with various individuals under false pretenses that often show just how horrible humanity can be. This year, via Amazon Prime Video, we are treated to the sequel film, Borat Subsequent Moviefilm.

In this film, Borat is retrieved from the prison camp he was sent to after the first film in order to return to America to deliver a gift (a monkey) to Mike Pence in order to restore Kazakhstan to greatness. Upon arrival in America, Borat learns that his daughter (Maria Bakalova) snuck into the crate with the monkey and ate it, leaving him without a gift to present. He ultimately decides that his 15 year old daughter would make the perfect gift and the remainder of the film ensues. I won’t discuss much of what happens in the film, since that would spoil it and many of the scenes are already topics of conversation in the media. Instead, I want to prepare people for their watching experience.

I say prepare people for their watching experience because I recommended the film to my mom and there was definitely a little confusion about what was going on (as she had not seen the original Borat). The important thing to remember is that as you are watching the movie, only Baron Cohen and Bakalova are in on the jokes. Everyone else thinks it is just normal, every day life. From living in the woods to the rally, from a debutante ball to the now infamous Rudy Giuliani scene – these scenes all play out without anyone else being in on the prank. This was the part where my mom was confused and I suspect others not familiar with Baron Cohen’s work will be as well. Given the subject of the film and current times, as well as the Prime Video platform, I suspect this film will be more widely viewed than the original and many people will find themselves just as confused.

Baron Cohen is an absolute genius when it comes to giving people just enough rope to hang themselves and we’ve seen it in every character he has played is his 20+ year career. This is the biggest thing that viewers who are new to his work need to understand. His ability to improvise and keep moving forward is what makes him so incredible. It’s also impressive that he found someone who could keep up with him. Maria Bakalova as Borat’s daughter, Tutar, was amazing. She held her own with him in every scene and performed just as well as he did. It’ll be interesting to see if this 24 year old is able to break into mainstream English films after this.

At the end of the day, as long as you can keep track of which parts of the film are fictional and which are not, you should have a great time. The movie is equal parts disgusting, funny, and eye-opening. It was also incredibly well done when you realize when it was filmed. 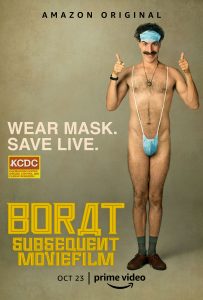 Movie description: Follow-up film to the 2006 comedy centering on the real-life adventures of a fictional Kazakh television journalist named Borat.

One of the shorts showing at Toronto After Dark this year is 10-33. The film, with a 10 minute runtime, throws you into the action almost immediately and leaves you on the edge of your […]