I saw Unbreakable for the first time shortly after its release in 2000. I remember loving the concept of the film and watching it quite a few times. When Split was released in 2016, I did not know it was tied to Unbreakable and my wife couldn’t understand why I was so excited when I saw the final scene because she hadn’t seen Unbreakable. With Glass available, it was finally time for my wife to see Unbreakable so that we could watch Glass.

The first thing I have to say is that this film holds up incredible well. In fact, I might have enjoyed it even more this time around. If you haven’t seen it, then just stop reading and go watch it. I’m not sure how my wife made it to her mid-30s without seeing the film, but it’s a travesty that she waited this long.

The film follows two characters – David Dunn (played by Bruce Willis) and Elijah Price (played by Samuel L. Jackson). We’re introduced to Price at his birth, born with multiple broken bones. We learn that he has a disease that makes his bones as brittle as glass. Dunn, on the other hand, is the sole survivor of a horrific train derailment. Price, a comic book fan, is convinced that comic books pass down history in the same way as ancient hieroglyphs and that they represent the idea that for everybody on one end of the spectrum (such as Price and his weak body) that there is someone on the opposite end (Dunn, who survived the train crash). He sets out to prove to Dunn that this is true and, although skeptical at first, there are certain events that cause Dunn and his son Joseph (Spencer Treat Clark) to question the validity of Price’s claims.

What surprised me the most about the film was the dark humour. I’m not sure if I missed it when I was younger or if my humour has changed over the years, but the movie is actually quite funny… in a very dark way. My wife and I found ourselves laughing frequently. It’s definitely not lighthearted humour, but there are some really good laughs to be had. The film also slowly builds with classic M. Night Shyamalan reveals, my wife was surprised a few times, which made the movie much more enjoyable.

Something else that I found highly entertaining, rewatching this film all these years later, is that there’s a scene in Price’s comic shop, where he’s in a wheelchair below a few comic covers. The first is Thor and, sitting next to it, above Samuel L. Jackson’s head, is a Nick Fury cover. I actually had to rewind the film to make sure my eyes weren’t deceiving me and then point it out to my wife. This is really cool foreshadowing since Jackson wouldn’t play Nick Fury until 8 years later in an uncredited role in Iron Man.

At the end of the day, most people who are going to watch this film have already seen it, but if you haven’t… check it out. It’s definitely one of M. Night Shyamalan’s better films and one that I’ve always enjoyed. Additionally, If you haven’t seen Split, you’ll definitely want to check out both Unbreakable and Split, so that you can set yourself up for Glass, which my wife and I plan on watching very soon. 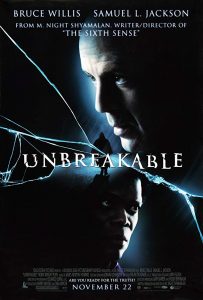 Movie description: UNBREAKABLE stars Bruce Willis and Samuel L. Jackson in a gripping supernatural thriller from master storyteller/filmmaker M. Night Shyamalan (THE SIXTH SENSE). After David Dunn (Willis) emerges from a horrific train crash as the sole survivor -- and without a single scratch on him -- he meets a mysterious, unsettling stranger (Jackson) who believes comic book heroes walk the earth, and whose sinister, single-minded obsession will impact David's life forever.

Since it was Father’s Day, I called my dad tonight after finishing Murder Mystery. We discussed how it was a good film, but not a typical Adam Sandler comedy. I went into it expecting the […]