2 years ago, when Netflix released The Christmas Chronicles, I thought they were on to something special. It was a lot of fun for all ages and quite entertaining. So, when I heard there was a sequel in the works, I was excited. The result was a great Christmas movie, but it lost a bit of what made the first movie special. I feel like there were a few missteps that really took away from the end result.

My biggest complaint with this sequel is that they aged it down. While I feel like the first film worked for all ages, this one was clearly targeted at a preteen audience. That shifted focus worked against the film for me, most likely because I’m not a preteen. I feel like the cardinal rule is age up movies with your audience, never down. Imagine if the Harry Potter franchise had aged down with each book/film, it would never have been as popular as it was. If not for this mistake, I feel like it would have been nearly on par with the original film.

Story-wise, I felt like this film was a lot of fun. After all, we had Chris Columbus writing and directing it. The list of films he’s been involved with means that he should be the king of writing and directing for 80s and 90s kids – Gremlins, The Goonies, Home Alone and Home Alone 2, Mrs. Doubtfire, Adventures in Babysitting, and so many more. It’s just that the first film featured siblings and, this time around, the elder sibling was removed from the main story and his replacement was younger.

In reality, it probably wasn’t aged down by much, it just felt like it was. In the original film, we had Teddy (Judah Lewis) and his younger sister, Kate (Darby Camp), helping to save Christmas. This time around it was Kate (Darby Camp) and her mother’s boyfriend’s son, Jack (Jahzir Bruno). Jack does make a comment that he’s only two years younger than Kate, which would mean he’s the same age as she was during the first film, but Teddy was older and that made some of the scenes feel a bit older. Either way, this new film is definitely a fun family film.

One of my favourite things was the return of Mrs. Claus. Seeing Goldie Hawn and Kurt Russel together for the entire movie was so much better than the brief cameo we got last time. I’m a huge fan of Overboard, I thought it was a lot of fun, so I love every opportunity that puts these two on screen together. My suggestion for The Christmas Chronicles: Part 3. On a pre-Christmas practice flight, Santa falls out of his sleigh and bumps his head, forgetting who he is. Mrs. Claus, upon seeing the sleigh return empty knows she has to find Santa and calls on Teddy, Kate, and Jack along with their parents to seek him out and save the day. When Santa is found, it’s up to True Believer Kate to help him remember who he is and save Christmas again. I think that would be a lot of fun and a great homage to Overboard.

I will say, even if this film felt like it was for a younger audience, I really enjoyed Santa’s Village and seeing all the elves at work… the studio did a great job of creating a magical wonderland that felt relatively unique from other Christmas movies.

If you haven’t seen this film yet, don’t wait… it’s available on Netflix. 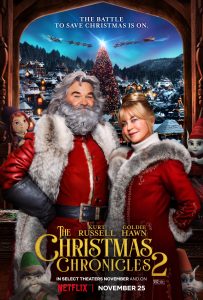 Movie description: It’s been two years since siblings Kate (Darby Camp) and Teddy Pierce (Judah Lewis) saved Christmas, and a lot has changed. Kate, now a cynical teenager, is reluctantly spending Christmas in Cancun with her mom’s new boyfriend and his son Jack (Jahzir Bruno). Unwilling to accept this new version of her family, Kate decides to run away. But when a mysterious, magical troublemaker named Belsnickel threatens to destroy the North Pole and end Christmas for good, Kate and Jack are unexpectedly pulled into a new adventure with Santa Claus (Kurt Russell). Written and directed by Chris Columbus (Home Alone, Harry Potter) and co-starring Goldie Hawn, THE CHRISTMAS CHRONICLES 2 is an action-packed adventure for the whole family that’s full of heart, humor, and holiday spirit.