Kurt Russell as Santa Claus. That could literally be the entire review. So far, everyone I’ve mentioned the film to has immediately said they were going to watch it for that reason alone. The casting was brilliant, Russell was brilliant, the story was brilliant. It may not be the best Christmas movie of all time (Christmas Vacation will forever hold that spot), but it sure did give it a run for its money.

One of my favourite things a film can do is select easily identifiable actors for smaller roles. In this case, it was Oliver Hudson and Kimberly Williams-Paisley as the parents of Kate (Darby Camp) and Teddy (Judah Lewis). My wife took one look at the screen and said, “Isn’t that the woman from Father of the Bride?”Similarly, I love seeing Oliver Hudson on screen, he was hilarious as Adam Rhodes in Rules of Engagement.

The film is a hilarious Christmas tale, book-ended by very emotional scenes. The film starts with a look at the Pierce family over the years and the important role that Christmas played in the family’s life. You quickly learn, however, that Doug Pierce (Oliver Hudson), has passed away, and the family is facing a Christmas without their father. The loss of a father has caused a rift between siblings Kate and Teddy, as both seem lost in their own way, while their mother, Claire (Kimberly Williams-Paisley) is overworked trying to keep the family afloat.

Claire is called into work on Christmas Eve and leaves Teddy to babysit Kate. Kate, who has been watching old family videos, notices an unexplained arm in one video and is convinced that she’s looking at footage of Santa delivering gifts. She convinces Teddy, with the help of a little blackmail, to help her catch Santa delivering gifts and our holiday movie is upon us. The kids catch Santa in the act and follow him outside. One thing leads to another and Santa crashes his sleigh and Christmas is in jeopardy. What follows is the very entertaining story of Kate and Teddy helping Santa get things back on track. I’m trying to be as vague as possible because I feel any slight spoilers will ruin some of the amazing scenes in the film, but this is definitely one to watch.

Kurt Russell is a refreshing new take on Santa Claus and I really appreciate how the character was played. Even more than that, the Easter Egg at the end of the film involving Mrs. Claus left me  on my feet cheering, it was one of the greatest film nods that I’ve seen in recent years.

I’ll leave you with two words: Watch it! 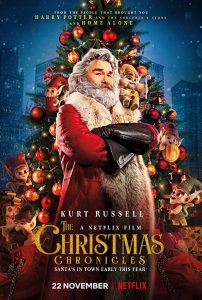 Movie description: The story of sister and brother, Kate (Darby Camp) and Teddy Pierce (Judah Lewis), whose Christmas Eve plan to catch Santa Claus (Kurt Russell) on camera turns into an unexpected journey that most kids could only dream about. After staking out Santa’s arrival, they sneak into his sleigh, cause it to crash and nearly derail Christmas. As their wild night unfolds, Kate and Teddy work together with Santa — as you've never seen him before — and his loyal Elves to save Christmas before it’s too late.

A Mom for Christmas

Several years ago, my wife had me sign up for the Disney Movie Club because it was the only way to purchase A Mom for Christmas, a movie she remembered from her childhood. We didn’t […]