In the film, Sigourney Weaver stars as Hildy Good, a realtor struggling with every aspect of her life. While she works hard to keep up appearances, she is troubled by financial woes, financially dependent children, a struggling business, and a drinking problem. All of this sets up Hildy for failure, but she is determined to succeed despite her shortcomings. Thankfully, Hildy has more support than most and, in my opinion, more support than she likely deserves. People really band together to help her out even though she repeatedly engages in self destructive behaviour.

I really enjoyed the interactions between Hildy and Frank Getchell (Kevin Kline), who is a saint in the film, a man who is, somehow, better than everyone around him. I also enjoyed her interactions with Rebecca McAllister played by Morena Baccarin. Where the film fell apart in terms of characters, was Hildy’s family. Her ex-husband, Scott (David Rasche), and her two children Tess (Rebecca Henderson) and Emily (Molly Brown) just didn’t seem to show her the support that I would have expected. My take away from the film was that Hildy’s alcoholism developed later in life, but her children acted like it had impacted them from a young age. Perhaps the film just doesn’t delve into this enough or have the time to setup the background, but given how many of Hildy’s character flaws are displayed, I believe that the depiction we see is accurate. Additionally, when the family gathers for dinner, with Hildy, a recovering alcoholic, at the table, they still see no harm in having alcohol everywhere from wine and beer to hard liquor. I don’t believe that this is realistic behaviour for family that truly cares.

Beyond the character interactions, I feel that the film synopsis lied to me, or, at the very least, mislead me. The written description goes out of its way to point out that Hildy is descended from Salem witches, something that is also mentioned in the film. Yet, there’s very little supernatural involvement. I think my wife (and editor) said it best, “I’m really disappointed by how minimally that was featured.” If you are going to take the time to call attention to it, a few small moments are not enough to fulfill expectations and I found myself unhappy with the result. Had the film put more effort into developing this angle, I would have called this a 4-star film.

Regardless, the film is enjoyable and well worth the 103 minute investment. I wouldn’t necessarily rush out to the theatre to watch this, or even rent it (although I can see how many others would), but I would definitely put this on my watchlist when it popped up on a streaming service.

The Good House was released in theatres on September 30. 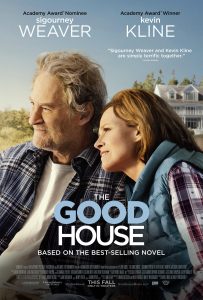 Movie description: The Good House follows Hildy Good (Sigourney Weaver), a wry New England realtor and descendant of the Salem witches, who loves her wine and her secrets. Her compartmentalized life begins to unravel as she rekindles a romance with her old high-school flame, Frank Getchell (Kevin Kline), and becomes dangerously entwined in one person’s reckless behavior. Igniting long-buried emotions and family secrets, Hildy is propelled toward a reckoning with the one person she’s been avoiding for decades: herself. Based on the best-selling novel by Ann Leary, THE GOOD HOUSE is directed by Maya Forbes & Wallace Wolodarsky, and stars Sigourney Weaver, Kevin Kline, Morena Baccarin and Rob Delaney.

I wanted to make a movie that captured the feeling of loss, accepting there is no control, and learning to become more present. So I came up with an idea about friendship and the ones […]