Lately, I’ve found that movies irritate me. When a film ends, I can see the brilliance that the writer put on paper. I can tell exactly what emotions the director wanted to evoke. When I read the director’s notes, I can feel how deeply they care about the movie. So, why am I irritated? I just don’t see that brilliance, those emptions, or that care reflected in the film. I think that Archenemy is a prime example of this situation.

I walked into Archenemy expecting a film that felt like an acid trip, after all I had previously watched writer/director Adam Egypt Mortimer’s Daniel Isn’t Real. That’s exactly what I got. A movie that blurred the lines between reality and insanity in a way that is stylistically his. If you put both films in front of me, I could have told you they were both directed by the same person even if I knew nothing about them. It’s just the way the film feels, there’s something unique to his movies.

This film had a lot going for it – an amazing cast, great music, and an awesome concept. However, it fell apart in the execution. The film suffered from what I now call the Bulgarian sound problem (based on past films where the audio has been edited by Bulgarian studios). I’m not sure where the audio editing was done for this film, but it wasn’t good. It was almost impossible to hear some of the dialogue without cranking the volume. The film was designed to be played at shake the walls volume just to hear what was being said and I despise movies that do that. Not everyone watches a movie in the theatre and not everyone wants their movie loud enough to hear outside. Additionally, the film suffered from god awful animation. I’m not sure what the goal was, except to possibly keep the budget as low as possible and hire a high school class to draw the animated sequences. When the cast was on screen, I was pulled in; I was fully engaged. When the animations started, I was somewhere between laughing and crying, hoping it would end because it was painful to experience.

Speaking of the cast, I should mention them. Joe Manganiello as Max Fist was amazing. His character was filled with emotion and you could see it and feel it. He was, without a doubt, the film’s saving grace. His eyes conveyed more emotion than anything else associated with the movie. You could tell that he was damaged, that his soul was broken. I’ve never seen a big man look so small. Of course, he was supported by an amazing cast in both Hamster (Skylan Brooks) and Indigo (Zolee Griggs). This pair portrayed brother and sister on screen and they were both great. Brooks gave us that feeling of someone who is hungry, someone who wants more, while you could see that Griggs was stuck in a situation she didn’t want to be in. She pushed through because she wanted to support her brother. They both did an amazing job. At one point, Griggs shares the screen with Paul Scheer and the counter play between the two of them is amazing to watch. When she is forced into a painful situation, you can see it on her face… you feel bad for her and your heart aches. I grimaced watching the screen as I made assumptions about what would happen next.

These actors and their real, yet iconic, humanity center the movie, and allow me to build around them a world of cosmic currents, neon reflections and painful choices. I don’t know if Archenemy is a superhero movie. But it’s a movie about superheroes.

At the end of the day, Manganiello makes this film. I was trying to figure out who the character is… who is Max Fist. I think that I’ve figured it out. He’s Hancock meets Parry from The Fisher King. Even as I write this, I want to like this movie more than I do. I want to tell everyone they should watch it. I’m struggling to do that. The film needs a serious edit with the sound remastered and the animation redone in order to get that recommendation from me. If you can watch the movie with the volume cranked to the point of gunshots making your ears bleed and you close your eyes and just listen to the animated scenes, it may be enjoyable. Otherwise, you’ll have to suffer to get a glimpse of the good.

We love our superheroes because they refuse to give up on us. We can analyze them out of existence, kill them, ban them, mock them, and still they return, patiently reminding us of who we are and what we wish we could be.

Grant Morrison, Supergods: What Masked Vigilantes, Miraculous Mutants, and a Sun God from Smallville Can Teach Us About Being Human

In his director’s notes, Adam Egypt Mortimer shared this quote from Morrison and I feel like that tells me a lot about where he wanted to take the movie. I feel like a bigger budget that could have allowed the horrible animation to be replaced with high quality animation or life action sequences could have brought his vision to life. He swung for the stars on an indie budget and that’s ultimately what cost this film.

Archenemy will be released on Friday, December 11. 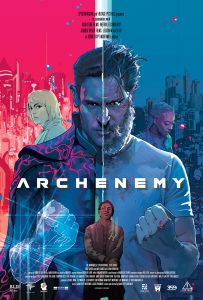 Movie description: Max Fist (Manganiello) claims to be a hero from another dimension who fell through time and space to Earth, where he has no powers. No one believes his stories except for a local teen named Hamster. Together, they take to the streets to wipe out the local drug syndicate and its vicious crime boss known as The Manager.