I wasn’t sure what to expect when I was presented with the opportunity to watch a Uruguay-Argentinian horror film. I try to avoid learning anything about a film before I watch it, unless it is a biopic and then I read up on the subject to see how accurate the story is. Since this is not a biopic (at least I hope it isn’t), I didn’t read up on the film and did not realize it was a foreign film. While I’ve watched a number of subtitled films, I’ve never watched a subtitled horror movie before. In fact, it wasn’t until I saw the film’s opening credits that I had signed up for an evening of reading.

Let’s start with the premise of the film, since I think the story is worth writing about. The film is centred around a single screen movie theatre that is showing Frankenstein: Day of the Beast. The theatre is mostly empty – a group of teens, a couple on their first date, a child who remained behind after the previous film, and a few others are the only ones around for the film’s final showing. The projectionist’s daughter, Ana (Lucianna Grasso) sends her father home for the night and volunteers to stay and run the final film. Little do they all know, a killer (Ricardo Islas) is about to unleash hell on all of them. Interestingly, Islas, our killer, is the director of the film being shown in the theatre. A film that I honestly thought was a campy, fictional film created for the movie until I read the credits.

The film starts off very slow; the setup takes a third of the film, if not longer. I feel like this was, in part, due to the limited dialogue and the fact that the film is subtitled. Once things kick off, however, the movie races forward and becomes highly entertaining. While the film plays on the big screen, our killer slowly begins to pick off the rest of the cast. Ana, watching from the projectionist’s booth, witnesses the events below, eventually getting drawn into the nightmare. Ultimately, only a few people survive and the killer is dispatched, but the door is left open for a very creepy sequel.

Those who read my reviews will know that I hate spoilers, so I will be as vague as I can with my next statements. This film contains some of the most entertaining and creative deaths (and death setups) that I’ve seen in a slasher flick. Director Maxi Contenti who co-wrote the film with Manuel Facal deserves a lot of credit for making this film so awesome. There are certain deaths featured in this film that will stick with me forever, they were very unique and well done – particularly the smoker and the kissing teens, which I believe tells you what to look forward to without spoiling the film. There was also an incredibly symmetry, as disturbing as it was, between the opening and closing sequences of the film. Even though it was incredibly grotesque, it was fantastic to see and I couldn’t help but smile at the disgusting on-screen images as I was thinking about how well the paired scenes played out.

My biggest concern with a subtitled horror movie was missing dialogue should a scene cause me to look away. Thankfully, this film could play out just as nicely as a silent film (at least after the initial setup), so I did not need to be concerned. Also, there was only one scene where I felt the need to look away momentarily to regain my composure and it had less to do with the gore and more to do with a personal phobia. There’s a film scene that I often describe to friends that I would love to include in a mob film should I ever write a script and this film came dangerously close to showing what I once thought was an original idea. They, however, played out the scene is a much more disturbing and unexpected way than I ever could have. Contenti and Facal took it to the next level and it is brilliant.

When I first planned this review, I considered the film to be a 3-star movie, but when I started writing I bumped it to 3.5-stars. As I wrote, I further turned it into a 4-star film and, I came close to going all the way to 4.5-stars. The horror elements of the film are excellent, but I would have appreciated a bit more dialogue and backstory. It is entirely possible that I lost a little bit of that because the film was subtitled, but more would have been better. There were definitely moments that I felt I missed or that I felt could have been better explained. That is, possibly, entirely on me. Either way, I loved what I saw and highly recommend seeing this film if you are a fan of horror movies.

The Last Matinee was released in theatres on August 6 and on VOD, Digital, and DVD on August 24. 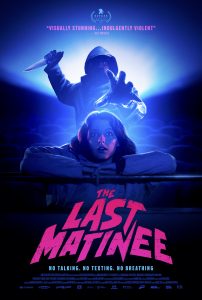 Movie description: The audience attending the last showing of a horror film in a small downtown cinema are terrorized by a murderer who begins to pick them off, one by one. The only person to notice that something strange is going on is the projectionist’s daughter.

Happy Cleaners is a family drama about a Korean family searching for the American Dream. While there are humorous points in the film, it is primarily a look at the struggles of the family. The […]