I always find it entertaining when I see actors that I consider to be mainstream in a B-horror film. That’s the case with Mary, a B-horror film from Michael Goi. Honestly though, the B-moniker may be misplaced here, as the film is actually relatively high quality. I was impressed with how good the shots looked and how “put together” the final product was. Even so, I was really surprised to see Gary Oldman (Tinker Tailor Soldier Spy and Darkest Hour) and Emily Mortimer (The Newsroom and Mary Poppins Returns) in this film. They are both excellent actors, so it’s no surprise that they did a great job in this film, even thought it had a mediocre script.

I always struggle with films that put themselves in the horror-thriller category, as I feel there’s a decent distinction between the two categories. This movie, with its 7 or 8 jump scares definitely fits the mold of a horror film. However, near the end, the film definitely exhibits more thriller-like qualities. I would normally be impressed with this, especially when combined with the stellar cast and the higher than expected production quality. However, this film was definitely dragged down by a half-developed script that relied on jump scares to create fear and had more than a few plot holes combined with questionable story-telling.

The film has a definite red herring at the start, the constant mention of spiders will have the viewer relatively convinced that the horror aspect of the film must involve spiders. However, other than the constant mention in the opening scenes, they have no impact on the story what-so-ever, which leaves you confused by the frequency with which they are mentioned. At this point, we should probably discuss the story. The film jumps around to various points in time, using labels on the screen to let you know the point that you are at. Unfortunately, there were a few times when I found myself questioning where in time we were due to missing labels or a jump without explanation. The film tells the story of a cursed sailboat purchased by an aging captain (Gary Oldman) who is determined to own his own boat. The maiden voyage of the ship is with his family, including his wife (Emily Mortimer) and two daughters, as well as two crewmen. The supernatural aspect of the film kicks in at this point and we have a horror story confined to a small boat. There are a number of “wait-a-minute” or “did that just happen” moments that take you out of the story and definitely caused me to deduct points. There are also moments that just don’t make sense. Not just the horror movie, “What was that?” type moment, but moments in the story itself that don’t make sense to the viewer. Finally, the conclusion of the film is foreshadowed in a very obvious way early on and that was disappointing, it felt like they could have done a better job of hiding the conclusion and making it decent twist.

With a rewrite and more reliance on the thriller aspect rather than the jump-scares, I think this could easily be a 3.5 or 4 star film. Everyone tried their best to save this script and they came close, but I don’t think most people will enjoy the movie. This is probably reserved for fans of the primary cast and late night TV viewers. I will say that the movie has decent albeit expected jump-scares and an interesting arc if you can avoid the plot holes and weak story. Check out Mary in theaters, on demand and digital HD on October 11. 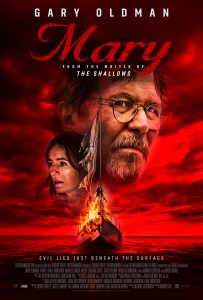 Movie description: David (Academy Award Winner Gary Oldman) is a struggling blue-collar captain looking to make a better life for his family. Strangely drawn to an abandoned ship that is up for auction, David impulsively buys the boat, believing it will be his family’s ticket to happiness and prosperity. But soon after they embark on their maiden journey, strange and frightening events begin to terrorize David and his family, causing them to turn on one another and doubt their own sanity. With tensions high, the ship drifts off course, and it becomes horrifyingly clear that they are being lured to an even greater evil out at sea.