I like to think of myself as a music lover. Pre-COVID, we would take in 10 – 15 concerts a year across a multitude of genres and my music collection spans a plethora of genres. I had, however, only a passing familiarity with Frank Zappa going into this documentary. Zappa is a 2-hour joyride into a mind that is both brilliant and perverse. It allows you to glimpse inside a man that influenced so much more than just the music world. At the same time, it gives you an idea of what future documentaries will be like. I doubt there are many people who have a vault of personal content – videos, music, pictures, and more – that compares to that of Frank Zappa. Part of what makes this film so amazing is the access that the director had to the vast quantities of material, something common for the current generation but less common from the 40s through to the early 90s.

The film, directed by Bill S. Preston, Esquire himself, Alex Winter, is filled with so many voice overs and interviews with Zappa that it’s hard to believe that this film was made decades after his death in 1993. The story that Winter weaves is quite impressive and I found myself enthralled, sucked into the film in a way that I hadn’t been in the past. I say that I’m not a documentary person, but I have really enjoyed a few documentaries recently. This one, however, took things to an entirely new level.

We set out to make that film, to tell a story that is not a music doc, or a conventional biopic, but the dramatic saga of a great American artist and thinker; a film that would set out to convey the scope of Zappa’s prodigious and varied creative output, and the breadth of his extraordinary personal and political life. First and foremost, I wanted to make a very human, universal cinematic experience about an extraordinary individual.

From Zappa’s childhood to his death, from his first performances to becoming Czechoslovakia’s Special Ambassador to the West on Trade, Culture and Tourism, it really has it all. Beyond the music, there were a lot things that really surprised me, including the aforementioned ambassadorship. Some of those included Zappa’s work writing greeting cards, his arrest for “conspiracy to commit pornography”, his lack of close bonds with his bandmates, and his attack in London. While these are probably not surprising revelations to a Zappa fan, keep in mind that I was barely familiar with his work prior to the film. Side Note: Now, I have vinyl on order that I can’t wait to listen to.

I think the documentary feels like a love letter – a look into the mind of a very special person from someone who cared to tell the story. The film is enough to drive anyone to want to learn more. It tells you a lot, but it doesn’t tell you everything. For example, the documentary doesn’t mention that the attack on Zappa caused his voice to be lowered after his crushed larynx healed. There’s plenty more to learn about Zappa after you watch the film, and I suspect that many will be inspired to do just that.

Frank Zappa was not only a creative genius, but also a great and eloquent thinker who articulated the madness of his times with extraordinary clarity and wit. A legitimate maverick who lived and worked amongst other extraordinary people in historic times. Ultimately, ZAPPA is not a retro trip into the past, but a thoroughly modern exploration of a man whose worldview, art and politics were far ahead of their time, and profoundly relevant in our challenging times.

In a time when it’s difficult to find a genuinely good alternative / rock band that formed in the past decade, it’s hard to believe the experiences that were available to music fans throughout Zappa’s lifetime. While pop prospers and music is based on auto-tune and popularity contents because mainstream music is so watered down and structured that it lacks feeling and originality, it was refreshing to be introduced to someone as incredible, talented, and unique as Frank Zappa. If you appreciate good music and find yourself crying at the garbage that fills radio stations and Spotify hit lists, then Zappa may be exactly what you need in your life. After Springsteen’s Letter to You, this is my second favourite music related film of the year.

Check it out today on VOD. 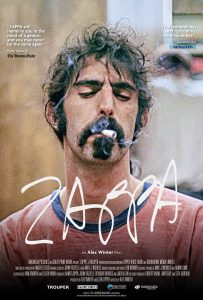 Finding Steve McQueen tells the “true story” of the 1972 heist of the United California Bank in Laguna Niguel by a gang from Youngstown, Ohio. I wrap true story in quotes because there’s clearly differences […]

O’Doyle Rules! That line is randomly yelled in the film and it made me smile. I loved Hubie Halloween, but when that line was said it brought me back to classic Sandler films. I literally yelled, […]