In what might be a first for me… I am not sure how to rate this film. I do, however, think that it is important that I include this note from the writer/director before I write about the film.

I think it’s important to say we began production on Silent Night before COVID-19 existed in our world. And sadly, whilst none of us could have anticipated or imagined how the pandemic would devastate, I would like to make it very clear that Silent Night has NO intention of delivering an Anti-Vax message.

In some ways, the inclusion of that disclaimer may provide spoilers, but I felt it was too important to not include it. The entire time I watched the film, I felt like there were messages conveyed that definitely leaned toward current anti-vax message, so I was relieved when I saw this note and I think it is important that it was included. I feel like this should have been a disclaimer on screen before the start of the film, but since that didn’t happen, I’m including it here.

As I said, I wasn’t sure how to rate this film and I’m still not sure. I’m still not certain I enjoyed the film. I was, however, enthralled by it. If the purpose of a film is to bring joy, then it probably missed its mark. If, however, the goal is to captivate the viewer, then mission accomplished. I found myself watching the film more out of morbid curiosity than anything else… so let’s back up and talk about the film a little bit.

When I first read the description of Silent Night, I had a pretty good idea of what it was about. Family and friends gather at a big home for an idyllic Christmas together and then the world goes to hell and zombies overrun them. I was, however, completely wrong. I couldn’t have been more wrong. There are no zombies, there are no monsters… the “monster” in this one is the environment. It’s happening, to paraphrase one of the characters, because we didn’t listen to Greta.

The film itself has moments that are humorous, moments that are depressing, and moments that make you shake your head. It is sometimes confusing and sometimes crystal clear. It feels like it takes advantage of the insecurities society feels after dealing with the initial news of COVID-19, so knowing that production began before the virus was, to some extent, comforting. Had it been written after, I would have just passed this off as another pandemic inspired scare story.

The story really asks two questions, “What would you do if it was your last night on the planet?” and “Would you trust the information the government shared with you?” I think, when you look at this questions, you can gather why Griffin had to clarify that the film wasn’t written to be anti-vax. Like I said though, it is hard to tell at times. There are some pretty common anti-vax, anti-science, and even anti-lockdown statements made throughout the film. I think that adds to my confusion over how to rate the film. Statements around the elderly being essentially disposable because they’ve had a long life and questioning the actions of scientists gave the film a scary bit of realism.

At the end of it all, the film is intriguing and I’m glad I watched it, but I’m not sure I enjoyed watching it. It felt more like I was watching a really disturbing documentary, especially in the final scenes. If anything, unsettled is probably the best word to describe how I walked away from the film. I do, however, recommend watching it. Just not when you’re feel depressed, concerned over COVID, worried about the state of the world, or otherwise in a less than positive state. Save this one for when you’re in a good mood and don’t mind your mood being soured.

Silent Night is available in theatres and on AMC+. 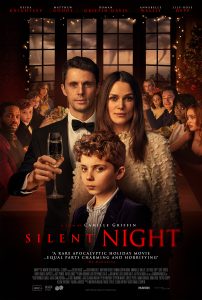 Movie description: From producers Matthew Vaughn (Kingsman franchise), Trudie Styler (Moon) and Celine Rattray (The Kids Are Alright), Silent Night follows parents Nell (Knightley) and Simon (Goode) who have invited their closest friends to join their family for Christmas dinner at their idyllic home in the English countryside. As the group comes together, it feels like old times – but behind all of the laughter and merriment, something is not quite right. The world outside is facing impending doom, and no amount of gifts, games or Prosecco can make mankind’s imminent destruction go away. Surviving the holidays just got a lot more complicated.