How do you make a perfect action comedy popcorn flick designed to provide pure entertainment for 2 hours? You put Dwayne Johnson, Ryan Reynolds, and Gal Gadot together in a film written by Rawson Marshall Thurber. The result is Red Notice and it is brilliant and entertaining. The only disappointing thing about the film is that it has to eventually end. If the cast isn’t enough to convince you, let me share some of Thurber’s resume, in case you don’t recognize his name. Dodgeball: A True Underdog Story, We’re the Millers, Central Intelligence, Skyscraper, and the cancelled too soon, Ryan Hansen Solves Crimes on Television YouTube series. Between the Netflix hype, the cast list, and the writer/director, how could you not want to watch this film?

In the film, we find John Hartley (Johnson), an FBI profiler, chasing Nolan Booth (Reynolds), the greatest art thief in the world. After Hartley, working with Interpol Inspector Urvashi Das (Ritu Arya), just misses catching Booth, they track him to his home with the help of the world’s most wanted art thief, The Bishop (Gadot). When the seized art goes missing, Interpol assumes that Hartley is the thief and locks him away in prison with Booth. This is where they learn that they were setup by Bishop and realize that they have to work together in order to escape and stop her.

That takes you to roughly the point where the synopsis stops, so I don’t want to reveal too much more. Instead, I’ll say that the film is a constant thrill ride with an ending that you simply don’t see coming until it slaps you in the face. For that reason, I recommend seeing the film sooner rather than later. Then again, with the biggest opening day ever for a Netflix film, a lot of people have already seen it.

There are bullets flying, punches being thrown, and even Nazi treasure thrown in for good measure. The film is really designed to entertain above all else. If there is one flaw, it is that somehow, mysteriously, not a single bullet hits anyone. I know movies like this walk a fine line to get the widest appeal and avoid showing any onscreen deaths, but there were definitely a few instances where I felt like I was watching firefights between Stormtroopers. My favourite parts of the film were Reynolds’s humour. I sometimes like to sit and think if anyone could replace him in films and I don’t think there’s anyone else that can deliver such genuine yet sarcastic dialogue. Johnson and Gadot are amazing at what they do and clearly cleaned up in the action scenes, but Reynolds was the comedic high point of the film. I doubt that comes as a surprise to most, but I felt it was worth mentioning.

If you have Netflix, you really have no excuse not to watch this movie, it is simply the best way to spend two hours currently. So make some popcorn, settle in on the couch, and put on the film.

Red Notice is available to stream on Netflix. 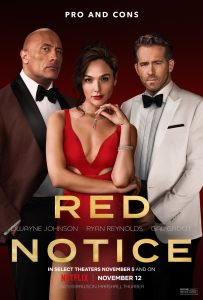 Movie description: When an Interpol-issued Red Notice — the highest level warrant to hunt and capture the world’s most wanted— goes out, the FBI’s top profiler John Hartley (Dwayne Johnson) is on the case. His global pursuit finds him smack dab in the middle of a daring heist where he’s forced to partner with the world’s greatest art thief Nolan Booth (Ryan Reynolds) in order to catch the world’s most wanted art thief, “The Bishop” (Gal Gadot). The high-flying adventure that ensues takes the trio around the world, across the dance floor, trapped in a secluded prison, into the jungle and, worst of all for them, constantly into each other’s company. The all star cast is joined by Ritu Arya and Chris Diamantopolous. Directed and written by Rawson Marshall Thurber (Central Intelligence, Skyscraper) and produced by Hiram Garcia, Dwayne Johnson and Dany Garcia of Seven Bucks Productions, Beau Flynn’s Flynn Picture Co. and Thurber’s Bad Version, Inc., Red Notice is a stylish globe trotting game of cat-and-mouse (and cat).