It would appear that this week is going to be endless disappointment when it comes to movies. I was a huge fan of Ant-Man, it was, arguably, one of the better Marvel films and it hit on both action and comedy, highlighting how valuable Paul Rudd can be outside of purely comedic roles. It was also a win because my wife, who typically dislikes Marvel movies (other than Deadpool and Logan), is a huge Paul Rudd fan, so Ant-Man easily won her over. Ant-Man and The Wasp, on the other hand, put her to sleep. The film had the same director, same core actors (with a few great supporting actors in Walton Goggins, Randall Park, and Laurence Fishburne)… the only change was members of the writing team. Edgar Wright and Joe Cornish have both been involved in some great films, I’m not sure that Andrew Barrer,  Gabriel Ferrari, Chris McKenna, or Erik Sommers were really up for the task of filling their shoes.

If the movie had a less capable cast, I may not have made it to the end. I expected more humour and entertainment value from the film. It’s hard to say what I found wrong with it because it was a decent movie, it just wasn’t great. It didn’t have the action I’ve come to expect from Marvel movies or the humour that I expect from an Ant-Man film. A lot of it fell flat. If you are a Marvel fan, you’ll likely watch this movie simply because it adds to the story. If you are a comic book fan, you’ll watch it because it once again brings comic characters to life on the big screen. If you were on the cusp of enjoying the MCU, this may be the movie that drives you away, it’s probably the last time I’ll be able to get my wife to watch one of the films with me again.

So let’s talk about what I enjoyed. Randall Park (star of Fresh off the Boat) was, by far, the greatest part of this film. His comic relief was amazing and a reminder of why I continue to watch Fresh of the Boat week after week, while I continue to delete other sitcoms from my PVR. A buddy movie with him and Paul Rudd would be way better than this movie was. Evangeline Lilly was also great – she gave us another great Marvel character and was able to go toe-to-toe with Paul Rudd’s Ant-Man to give us a great partnership that worked really well, even if it had a few bumps at the beginning. Hannah John-Kamen was a great casting choice. I enjoyed her performance in Killjoys (until SyFy picked Killjoys over Dark Matter [the superior show] and I was forced to boycott Killjoys as a result), so it was great to see her pop up somewhere else.

If that was the good, up next would be the bad. First off, we have to talk about Walton Goggins. The man is a phenomenal actor. He’s one of those people that when you see him in the cast, you know that you are watching the film, even if it is just for his performance. He was underutilized in this movie, he could have been so much more and added so much to the film but he was handed a weak, poorly written character. He still shone as best he could, but it wasn’t as brilliant as it could have been. Similarly, Laurence Fishburne’s character felt lacking. He is an amazing actor, but he didn’t have a lot to work with, the character felt very one dimensional and attempts to give us more fell flat.

At the end of the day, I wanted more. I wanted something as good as Ant-Man. What I got was a film that fell into the lower tier of the middle of the MCU. The director, the cast, and the fans deserved better, but films are ultimately made (or destroyed) by their story and, in this case, the story definitely hurt the film. 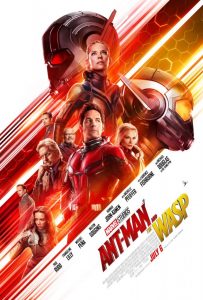 Movie title: Ant-Man and The Wasp

Movie description: In the aftermath of Captain America: Civil War, Scott Lang grapples with the consequences of his choices as both a Super Hero and a father. As he struggles to rebalance his home life with his responsibilities as Ant-Man, he’s confronted by Hope van Dyne and Dr. Hank Pym with an urgent new mission. Scott must once again put on the suit and learn to fight alongside the Wasp as the team works together to uncover secrets from the past.