Shoplifters of the World has given me a new first… the first time I’ve seen a film state, “Based on true intentions.” “How does that make any sense?”, you ask. Well, let’s start with a bit of background before we jump into the film.

For years, there was a rumour that a man held a radio station in Denver at gunpoint when it was announced that The Smiths had broken up in 1987. The rumour continues that he forced the station to play the band’s songs all night long. In reality, an 18-year old intended to do just that, but thought better of it sitting in the radio stations parking lot and told an employee his plan. Westword, a denver-based publication, has an article on it, as well as a link to a follow-up article, if you’re interested in reading the real story.

The film has a similarly interesting story. According to the Wikipedia page, the film first starting casting in 2012 with Jessica Brown Findlay (Downton Abbey), Zosia Mamet (The Flight Attendant), Jeremy Allen White (Shameless), and Skylar Astin (Zoey’s Extraordinary Playlist). The parts were recast in 2016 and then, when filming began in 2018, some parts were recast yet again.

I should establish that I am not a fan of The Smiths. I don’t hate their music, I’m just not a fan… it’s music that is there and I’ve heard it, but there’s nothing special about it. The film, however, is clearly targeted at the die-hard, life-long Smiths fan.

It goes further still, in mining Smiths lore and legend and threading through hints and hidden messages – the names of the guitarist’s first band, the streets where they were born, lines from infamous early pen-pal letters, snatches of famous interviews; there are even Easter-eggs in the set design, the costumes, the casting – enough buried treasure to keep the avid fan digging in for months on end, trying to connect all the dots and solve all the puzzles.

The film follows four friends – Cleo (Helena Howard, The Wilds), Sheila (Elena Kampouris, Sacred Lies), Patrick (James Bloor, Barkskins), and Billy (Nick Krause, The Descendants) – on the day that The Smiths announce their breakup. They are out of high school, experiencing their first year of college (based on dialogue) and Billy has enlisted. The next day, he is to ship off to basic training and this is their last hurrah as a group, but as massive Smiths fans, the mood is soured.

Things change, however, when Dean (Ellar Coltrane, Boyhood), a record store employee with a crush on Cleo, decides to take over the local radio station and force the DJ, Full Metal Mickey (Joe Manganiello, True Blood) to play nothing but The Smiths all night… leading to Smiths fans across the city celebrating.

Music is rather profound. Next year, I’ll be 40 and, over the years, my musical interests have shifted, grown, and expanded, but the bands and genres that I loved as a kid, I still love today. I’ve screamed, cheered, and cried at concerts and I’ve done the same at home listening to an album. I completely understand and relate to the musical obsession displayed in this film and I think, for that reason, the film spoke to me more than I expected. I didn’t have a connection with the music, but I had a connection with what those friends were feeling. The pain, the loss, the sense of emptiness and despair. Kijak did a great job of capturing that and the actors did a great job of portraying it.

At the same time, the interactions between metalhead Full Metal Mickey and his “captor”, Dean, are pretty compelling. I could have watched a film that just involved them. In fact, I think that Kijak wrote two compelling films, one a look at coming-of-age via action and the other via dialogue and he merged them together to tell a masterful story. This famous Smiths rumour just happened to make for a great background to tell these two stories.

The film is a set of quotes within quotes. It’s an arched eyebrow, a deliberately smudged eyeliner, in parenthesis. The shape is the substance. The surface is the depth. It’s so…’80s. Shot in 2018 in a deeply divided United States, we hope to deliver a tonic: a mirrored shot of the divided United States of 1987, reflecting hope through nostalgia, through a tale of lost girls and boys, in middle-America, living in a dream beamed to them from another cultural planet, inspiring an alternative way to dress, to think, to be. Our nostalgia may have been tarnished, broken or betrayed – but, to quote The Smiths, we “need to cling to something!” Unite – TAKE OVER!

I didn’t have high expectations going into the film, but I came out with a smile on my face. It reminded me of what a comfort certain music was in my formative years. It reminded me of the friendships that I developed due to that music, some of which remain to this day. The film is good, especially if you have an appreciation for music and a love of the coming of age film. If you do, this is a must see film. If not, it’s still enjoyable but you may not like it as much as I did.

RLJE Films will release Shoplifters of the World in Theaters and on Digital and On Demand on March 26, 2021 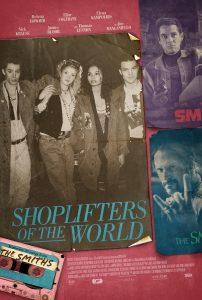 Movie title: Shoplifters of the World

Movie description: In the Summer of 1987, four friends, reeling from the sudden break-up of the iconic British band The Smiths, embark on a night out of partying to mourn their musical loss. At the same time, an impassioned Smiths fan takes a local radio DJ hostage at gunpoint and forces him to play nothing but Smiths tracks. With the radio station playing as the soundtrack to their night, the friends go on a wild journey of self-discovery that will transform them forever. Featuring an incredible soundtrack – including 20 songs from The Smiths – Shoplifters of the World is a glorious ode to the craziness of the ‘80s and the power of music to change people’s lives.

When I showed my wife the trailer for First Date, she asked if I was sure it was a modern movie, she thought it felt like it was from the late 90s. We’ve seen, during the […]