There are only two ways to live your life.
One is as though nothing is a miracle.
The other is as though everything is…

This quote, often attributed to Albert Einstein, starts off The Secret: Dare to Dream, a film from Lionsgate based on the best-selling book The Secret by Rhonda Byrne. I like this quote, I think it’s an inspiring way to look at things. I don’t know that it accounts for the space in between those two options, but I suppose, if you believe the quote, you don’t see a space in between. I also liked the movie, but to really understand it, I felt like I needed to understand The Secret, so my research for this movie involved reading the book (well the first 10% of it according to my Kindle). I read part of the book, so that you don’t have to. Reading it, I felt like it was telling me about the power of positive thinking, but that’s another self-help book. Instead, it discusses the law of attraction and the idea that like attracts like, which is, in my mind, nearly identical to the power of positive thinking. It compares your thoughts to magnets. The problem I had with this, and the reason I stopped reading the book, is that the law of magnets is that like repels like and opposites attract. We can further summarize the book with this quote from the author.

So, the big question… how do you have a movie based on a self-help book? You capture some of the magic of a romcom that everyone loves, Sweet Home Alabama, by hiring its director, Andy Tennant, and male lead, Josh Lucas, and mixing in America’s sweetheart, Joey Potter herself, Katie Holmes. Still confused as to how this becomes a movie? You can’t be blamed for that… based on what I read of The Secret, I would have been confused by a movie as well. After watching it though, I completely understand how the book, or rather the book’s concept of the law of attraction, makes for brilliant movie material. I’m actually surprised The Hallmark Channel didn’t option the book and produce a 200-movie series. I am, however, really happy with how things turned out, because I loved the film.

The movie actually services as brilliant advertising for the book. I wouldn’t be surprised if the book sees a spike in sales based on the film because the concept is incredibly romantic and Josh Lucas delivers it in such a way that I feel he deserves the name McDreamy. So what is the movie about?

The film is about Miranda (Katie Holmes), a woman with three children who lost her husband 5 years prior to the beginning of the movie. She’s got a mountain of debt, a house that’s falling apart, and an overbearing mother-in-law. She’s also dating Tuck (Jerry O’Connell) who is also her boss. When Bray (Josh Lucas) shows up, it’s hard to pinpoint what is going on and why he’s there. I think the only way to describe him is “zen-like.” The film immediately becomes a question of Tuck or Bray and, while I always cheer for Jerry O’Connell (I’ve loved him ever since My Secret Identity), it was hard not to cheer for Bray, practitioner of The Secret. As I said, it’s an incredibly romantic concept and, when Hollywood movie magic is involved, it seems like the perfect philosophy.

Releasing the movie now, mid pandemic, is a genius move. The film was hope-filled and heartwarming. It was a hot cup of cocoa, a warm blanket, and that special someone cuddled up against you. Don’t expect an incredibly deep, thought provoking film. Don’t expect action or laugh out loud moments. You can expect to smirk, giggle, and shed a couple of tears. You can expect to enjoy yourself and feel your worries float away. I was incredibly stressed going into this film and it was actually an incredible 101 minutes of relaxation and stress relief. It was a realization that Josh Lucas and Katie Holmes are movie gold. There weren’t quite enough laughs in this for me to call this a romcom, although in my head that’s how I want to think of it. I want more movies starring these two, it just seems so perfect.

If I haven’t made myself clear, I definitely recommend watching this movie. Whether or not you buy into the concept of The Secret and the law of attraction, it does, like I said, make for awesome romantic movie material.

The Secret: Dare to Dream will be available On Demand on Apple TV and everywhere you rent movies on July 31. 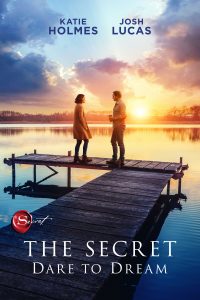 Movie description: Based on the groundbreaking best-selling book by Rhonda Byrne, The Secret: Dare to Dream follows Miranda (Katie Holmes), a young widow trying to make ends meet while raising her three children and dating her boyfriend (Jerry O’Connell). A devastating storm brings an enormous challenge and a mysterious man, Bray (Josh Lucas), into Miranda’s life. Bray reignites the family’s spirit but, unbeknownst to Miranda, also holds an important secret — one that will change everything. With its timeless messages of hope, compassion, and gratitude, The Secret: Dare to Dream is an inspiring and heartwarming film that shows how positive thoughts can transform our lives.