I went into Ride the Eagle with very high expectations. I think if I’d expected less, I could have easily called this a 4.5-star or even a 5-star film. Honestly, I still really enjoyed the film, I just wanted more. The film featured three of my favourite actors to watch right now because they are all geniuses on screen. Jake Johnson, D’Arcy Carden, and J.K. Simmons are all at the top of their game and I put them on too much of a pedestal.

In Ride the Eagle, Leif (Johnson) learns that his estranged mother has passed and she has left him a beautiful cabin that comes with strings attached. She realized that there were a number of lessons she never taught him and decides that her last act will be to teach him those lessons by withholding the cabin until he completes a series of tasks. What follows is a heartwarming and entertaining film where we see Leif reconnect with an old flame (D’Arcy Carden), meet an interesting character (J.K. Simmons), and build a bond with his dead mother (Susan Sarandon). It’s a perfect concept with perfect execution, but it is also safe. The film doesn’t jump out and capture your attention. It makes you laugh, it makes you smile, and it makes you miss your family. It inspires introspection and encourages you to revisit your past without dwelling on it. There’s nothing wrong with that, that’s why it’s a 4-star movie in my books… but it’s not what I wanted.

In trying to think of how to best describe the film, I couldn’t help but think of my family. So, I need to take a step back and share a couple of stories. The first involves a family Christmas tradition. Every year, my family would go out to get a Christmas tree. We’d bring home that freshly cut tree and my mom would open a can of Habitant Pea Soup. I honestly don’t remember eating it any other time of the year and I don’t think I’ve had it since, but when I see that can and think of that soup it brings me back to that time. It is warm and comforting. It’s not a gourmet meal, it’s not going to be anyone’s last supper, but it has a special place in my heart. Similarly, I think of my grandma who would offer anyone who came into her home, “a nice cup of tea” and “a nice piece of toast.” For a while I lived with her and every night she’d make us “a nice cup of tea and a nice piece of toast.” I still enjoy that in the evening from time to time and it fills me with memories of her and, yes… I still use the adjective nice. To me, that’s what this film was – it was Habitant Pea Soup after cutting down the Christmas tree; the welcoming question of “would you like a nice cup of tea and a nice piece of toast.” It wasn’t a 5-star meal prepared by the world’s most famous chefs and nobody will call it a culinary masterpiece, but it was warm, comforting, and familiar. It is a memory that makes me smile.

Jake and I wrote and made the film at a time when we were all separated from friends and family, which got us thinking about the important things in our own lives. We both have young families and we began talking about our own relationships with our parents and how they can break down, which is so hard to fathom with your own children. We were interested in this area and how we can hold grudges that are ultimately petty and pointless. While I wanted to explore these themes, I wanted to do so in a natural way. It was important that it all felt real and grounded but also not predetermined or obvious. I think often these bigger emotion moments in life don’t occur at the times we expect or design them to. For Leif, finding out his mother was dead doesn’t have the weight we might expect because he was closed off to that part of his life. All this is to say I wanted to make the movie relatable in a nuanced, comedic tone.

When I read director Trent O’Donnell’s statement, I can’t help but feel like he hit the nail on the head. He and Johnson, with whom he co-write the film, created something special. They created something that has had me questioning this entire review if I should have given the movie more than 4-stars. The film didn’t wow me, but it did make me laugh and think. Perhaps that is enough. Then again, maybe it isn’t. I’ve never actually been this uncertain of a review. I have, on occasion, adjusted the rating of a film as I’ve written my review, but I’ve never struggled this much. I’ve never reflected as much on how deeply a film impacted me and how it touched me. At the same time, it wasn’t as powerful as some other films, it didn’t hit me as quickly. I think that, for that reason, I should stay true to my original rating, but understand that I truly loved this film. Even writing this, I’m still not sure what I should do.

At the end of the day, the film is impactful and meaningful. It features my current favourite “every man”, Jake Johnson, the funniest woman on screen today, D’Arcy Carden, and the man who steals more scenes than anyone else, J.K. Simmons. It is a must watch film. It is as simple as that. It is my nice tea, my nice toast, and a warm bowl of pea soup and I have no doubt that it is a movie I will never forget.

Ride the Eagle will be released in theatres, on demand, and digital on July 30. 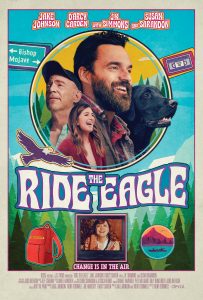 Movie description: When Leif’s (Jake Johnson) estranged mother Honey (Susan Sarandon) dies she leaves him a “conditional inheritance”. Before he can move into her picturesque Yosemite cabin, he has to complete her elaborate, and sometimes dubious, to-do list. Leif and Nora, his canine BFF, step into Honey’s wild world as she tries to make amends from beyond the grave in this hilarious and heartfelt comedy.

My wife and I finally sat down to watch Glass, a film that I’ve been looking forward to since it was announced. We saw Split in theatres and I was shocked by the tie-in to […]