I’ve always been a sucker for any sort of teen romance; be it romantic comedy, drama, or late-night comedy. It’s a genre that I’ve loved and watched for several decades. While I’m known to most of my friends and family as a lover of romantic comedies, I love anything filled with emotion, which is why I still list A Walk to Remember among my favourite movies. I think that Chemical Hearts did a great job of joining the teen romance genre in a way that is new, yet familiar. I don’t know yet if that familiarity is because it shares a kinship with other movies or because it has reminders of my own teen years, but I’d be willing to guess that it’s a mix of the two.

The film features Henry (Austin Abrams), a seventeen-year-old outsider. He has a couple of friends and works on the newspaper, but he won’t be winning any awards for most popular student. Outside of class, his biggest hobby is kintsugi or kinsukuroi, the Japanese art of repairing broken pottery with lacquer mixed with powdered precious metals. Just as he’s about to become editor-in-chief of his school newspaper during his senior year, he meets Grace (Lili Reinhart), a transfer student who walks with a cane and appears to hate the world. The faculty member in charge of the paper attempts to make Henry and Grace co-editors of the paper.

This pairing is what provides opportunity for our story to unfold. We see Henry’s desire for love filled with caution and hesitation. At the same time, we experience Grace’s pain and frustration as her history unfolds. They are uncomfortable and awkward and learning how to exist both together and as individuals on the brink of adulthood, which adds to the intensity of their emotions. It doesn’t help that Henry is surrounded by relationship extremes – his older sister is experiencing a break-up and his parents are high school sweethearts that are still as in love as they were the day they met.

The name of the film, based on the idea that emotions such as love and heartbreak are simply chemical reactions in the brain is perfect and I’m inspired to seek out the novel by Krystal Sutherland that the film is based on. I think this is something that we can all relate to – finding love, losing it, and feeling like you’ll never recover. This movie speaks to those emotions and presents them with the scenery, the music, the cinematography, the dialogue, and the acting. It does a great job of rolling these emotions up into something that we can all see and feel. I felt Grace’s pain and heartache and I felt Henry’s struggle.

Something that stood out to me when reviewing background on this movie was how it came to exist. Reinhart was impressed with book and wanted to make the film, so she reached out to writer/director Richard Tenne, who penned the screenplay before they had secured the rights to the film.

I loved that it was not what you expect when talking about a teen love story. It seemed a lot deeper than many other young adult romances out there. It’s rawer and more grounded in grief. Most teen movies concentrate on drinking and experimenting and losing your virginity. This is the internal struggle of these two young people feeling overwhelming emotions as their worlds are changing.

If you are going into this movie expecting a mushy, tear jerking romance… you might want to reset your expectations. This movie is messy, it’s painful, and it’s visceral. The movie was not at all what I was expecting, and so much better than I thought it would be. It reminds us that we don’t exist in a bubble and we may never fully understand what others are experiencing. I always rate my movies before I write the review and then I wait to see if the review changes my mind. I had this movie as 3.5-stars when I laid it out. I upped it to 4-stars while I was writing and I’m still on the fence about that rating. So, ultimately, this movie gets 4.5-stars in my book. I do think that the movie deserves a re-watch just to fully ingest all of the nuance. 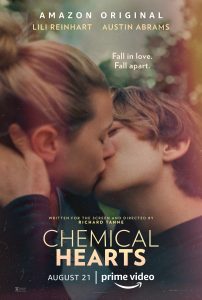 Movie description: Seventeen-year-old Henry Page (Austin Abrams) has never been in love. He fancies himself a romantic, but the kind of once-in-a-lifetime love he’s been hoping for just hasn’t happened yet. Then, on the first day of senior year, he meets transfer student Grace Town (Lili Reinhart) and it seems all that is about to change. When Grace and Henry are chosen to co-edit the school paper, he is immediately drawn to the mysterious newcomer. As he learns the heartbreaking secret that has changed her life, he finds himself falling in love with her — or at least the person he thinks she is.