Dashcam is an interesting film. I’m not sure if it uses the Screenlife technology or not, but much of the film plays out like Screenlife films. This is a concept that I’ve fallen in love with. Instead of flashy visuals and expensive CGI, storytellers need to create a compelling story and actors need to convey the majority of their emotions with their faces and their voices. It is such an amazing concept, that I highly recommend films that use it. Be sure to check out Profile for a great example of a Screenlife film. As I said though, I’m not sure if this uses the same technology or not, but it is the same concept for much of the film. Dashcam does not limit itself to the screen and that’s honestly where it starts to fall apart for me, the film’s best elements took place on a screen.

Dashcam follows Jake (Eric Tabach) a video editor who is preparing a news story for reporter Tim (Zachary Booth), who he dislikes immensely. Jake has conversations with Tim as well as his girlfriend Mara (Giorgia Whigham) and her friends via Facetime. Jake is waiting for the final piece of footage, dashcam footage from a police cruiser, in order to publish a story on Halloween night. The story is surrounded by a lot of conspiracy theories and everyone seems to be getting in on it. At the same time, we’re clearly in the midst of COVID as a video Halloween party is being held and Jake is terrified to leave his home. Things start to heat up when Jake receives an email intended for somebody else and he starts to wonder if any of the conspiracy theories are true.

DASHCAM isn’t a “pandemic film” but it is very much born out of events we’ve seen over the last year—confusion, isolation, virtual gatherings, and disturbing video evidence of police brutality. It was our aim to produce a film that felt tangential to our collective experience throughout the pandemic while telling a suspenseful, original story to which we could all relate.

Dashcam does a lot of things right and plays into a lot of insecurities that we all experience. As Nilsson says, it combines a lot of the events that we’ve seen over the past year and it does this quite naturally… nothing feels forced. Some “pandemic films” have felt like they’ve forced the video calling aspects, but everything flows well in this film. It also plays into that creepy feeling that I’m sure a lot of computer users have had. It’s late at night, dark outside, your lights are turned down, and you’re focused on a bright computer screen. Suddenly, an out of place noise startles you and has you looking around. I’m not sure about everyone else, but I’ve experienced that more than a few times and, as a result, I found myself on the edge of my seat as Jake was processing the footage and working through the night.

It should come as no surprise that I enjoyed the film. Eric Tabach and Giorgia Whigham were both brilliant and the supporting cast did a decent job as well. The film did a great job of sitting on the edge of creepy, while making you wonder what would happen next, keeping you perched waiting for that explosive moment. I think that is the film’s one problem. I feel like Nilsson didn’t have an ending in mind and, as such, this great film just sort of fizzled out. The film is short, coming in at just 80 minutes, but the first 60 minutes are incredible… those last 20 minutes lose the viewer a bit. They pull you out of Jake’s apartment, out of his “bubble world”, and give you a very anticlimactic ending. I watched the film with so much excitement and intrigue. I was fascinated and had drawn up a dozen great endings in my mind, different ways the film could play out. Instead, the tension was gone and the final scenes finished up the story in the most boring way possible. I still think the movie is worth watching, but be prepared to be let down by a dull conclusion.

Dashcam will be released on October 19. 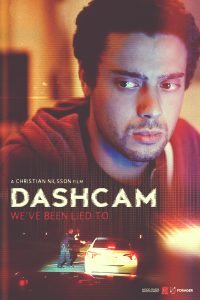 Movie description: DASHCAM is a psychological thriller following Jake—a timid video editor at a local news channel who fantasizes about becoming a reporter. While editing a piece on a routine traffic stop that resulted in the death of a police officer and a major political official, Jake is inadvertently sent dashcam video evidence that tells a completely different story. Working alone from his small apartment in NYC, Jake uses his skills as an editor to analyze the footage and figure out the truth behind what actually happened. Has Jake uncovered a conspiracy that he can break on the morning news? Or is he seeing things that aren't really there?