My wife and I finally sat down to watch Glass, a film that I’ve been looking forward to since it was announced. We saw Split in theatres and I was shocked by the tie-in to Unbreakable. However, my wife had never seen Unbreakable, so we had to watch it before we could watch Glass. We finally saw Unbreakable, so I finally got to see the conclusion that I’d been eagerly awaiting. It would probably be most accurate to say that I was disappointed with Glass, it could have been amazing and it had brilliant moments, but it wasn’t everything I wanted it to be.

Bruce Willis as David Dunn is very clearly 19 years older than he was in Unbreakable and it was great to see that the brought back Spencer Treat Clark to play David’s son Joseph. The return casting of Spencer along with Anya Taylor-Joy (Casey Cooke from Split) and Charlayne Woodard  (Mrs. Price from Unbreakable) was great, given the time that has passed, especially since Unbreakable, it was great to see them get back all of the original cast members. Even M. Night Shyamalan’s cameo was well done. Since we had just watched Unbreakable the night before, my wife’s immediate comment was, “Is that the drug dealer from the first film?”

Glass picks up where you would expect with David embracing the heroes role and going out on patrol with his son acting as his sidekick on the computer. He goes out on “walks” every night to confront criminals while looking for a vicious serial killer (James McAvoy’s Kevin Crumb (and other personalities)). After Dunn and Crumb face-off, they ultimately end up in police custody and are placed in a psychiatric hospital along with Elijah Price (Samuel L. Jackson) where they are treated by Sarah Paulson’s Dr. Ellie Staple. At this point, it’s probably safer to not reveal details, as with all these movies, part of the fun is the mystery of what’s going to happen next.

The film surprised me a few times with unexpected twists. They definitely improved the movie for the most part. One of them we just couldn’t believe, especially with past facts in the series. We were so confused that we waited out the credits for a post credit scene that would resolve our disbelief, but it never came. At this point, however, I feel like the door has been left open for a couple of additional movies and I’d really like to see another one pop-up. There are a few questions at the end that could be further explored and I think they would make for interesting follow-up films.

I think my biggest issue is how slowly paced the film is and without any of the dark humour that filled Unbreakable or the intrigue from Split. At one point, I paused the film, curious to see how far into it we were – 1:15 had elapsed, we still had over 45 minutes to go. It felt like we had been watching the film for hours. I think that the supporting characters – Joseph, Casey, and Mrs. Price – were underutilized and could have been better used to fill some of the slower points of the film. I honestly don’t believe that Joseph would have been so passive in trying to get his father released from the psychiatric hold. I feel like it would have been a great time to involve the public or bring more attention to the issue, his reaction was just unrealistic, especially in the social media age.

At the end of the day, I enjoyed the film enough to finish it. It wrapped up some questions from the previous films and made good use of comic book mythos to tie everything together. It wasn’t the ending that I wanted nor was it really the story that I wanted, but it wasn’t my story to tell. So, I can disagree with it and I can feel that the pacing of the film was off, but it was an interesting way to sum everything up. As I said, I hope we see more, I feel like I’ve been left with a lot of questions, so we’ll have to see what comes next. 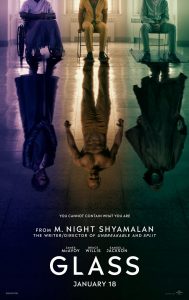 Movie description: From Unbreakable, Bruce Willis returns as David Dunn as does Samuel L. Jackson as Elijah Price, known also by his pseudonym Mr. Glass. Joining from Split are James McAvoy, reprising his role as Kevin Wendell Crumb and the multiple identities who reside within, and Anya Taylor-Joy as Casey Cooke, the only captive to survive an encounter with The Beast. Following the conclusion of Split, Glass finds Dunn pursuing Crumb’s superhuman figure of The Beast in a series of escalating encounters, while the shadowy presence of Price emerges as an orchestrator who holds secrets critical to both men.