A lazy Sunday afternoon and an empty apartment, what could be better than a thriller centred around a technology I frequently use. Jeremy Ungar’s Ride brings to light, in one of the worst ways possible, the risks we take every time we open our ride sharing apps. Everything about the fictional movie service is designed to make you think of the services we use every day. We see convenience, but this movie and real world research demonstrate that there are risks involved. Regardless of where you fall on the ‘to use or not to use’ debate, ride sharing technology is compelling enough to drive viewers to this film. I thought the director did an excellent job of selling his vision of technology in this statement:

Like my perception of LA, new technology is beautiful and impressive and dangerous and ugly. Every day, tech creates interactions that have never existed before, then instantly become second nature – a Tinder date or an Uber ride.  But there’s an increasingly universal dark truth to our relationship with technology: as we become more used to these incredible gadgets and apps and ideas, the extraordinary becomes commonplace.  And once that happens, we stop using technology, and it starts to use us. Innovation is driven by a need for profit – a need for users, and so, what our favorite apps actually want us to do is use them: by their very nature, the apps condition us to obey.

Since the movie is relatively new (released on Friday) and the description contained words that always draw me in – In Theatres! – I had to give it a go. The movie stars Jessie T. Usher (Survivor’s Remorse) as a ride sharing driver named James, who hits it off with one of his fares, Jessica (Bella Thorne of The Duff, Blended, and The Babysitter). She invites him for a drink but he declines in order to pick up more fares, ultimately ending up with Bruno (played by Will Brill) in his car. Bruno is probably best described as “off” as in, “there’s something off about him.” He is charismatic, however, and James soon warms to his lack of a destination and desire to just kill time (the $100 tip likely helped). Bruno eventually convinces James to go back to the bar for Jessica and that’s when the movie turns it up. The thriller kicks in and takes you on a ride.

The movie is big on quotes, starting with a line commonly attributed to Yeats, which is the attribution the movie provides, “There are no strangers here; only friends you haven’t yet met.” Unfortunately, there’s no evidence that this is actually a Yeats quote. This ultimately becomes more interesting when a key scene in the movie rests on an incorrectly attributed quote, which is later corrected. Multiple famous movie quotes are used over the course of the film and they all fit their scenes perfectly. The quotes lead to interactions between the characters that had me anticipating a different ending for the film, one I would have found quite interesting. My assumptions were incorrect (although I noticed many people echoed my expectations in comments on the trailer) and the real ending wasn’t quite as tidy as I would have liked.

At the end of the day, this is a 75 minute film with a three person cast and the predominant setting is the interior of a car. I enjoyed the cinematography, particularly the recurring footage of storefronts passing as the car drove around town. I also enjoyed the dialogue, which is why I was excited to read this comment in the director’s statement:

My background as a director is in theater, so – in writing what I hoped would become my first feature – I wanted to build something contained, and dialogue driven, in which power dynamics could turn on a dime and I could explore – moment-by-moment – the anatomy of manipulation: how technology manipulates people, and in turn how people manipulate each other. My hope was to use age-old theatrical and cinematic tactics to tell a story that could only exist today.

I find that in a movie like this, one that rests entirely on the conversation holding your attention, that it can be hit or miss based on the dialogue. In this case, the conversations were interesting, the characters were believable, and I found myself on the edge of my seat holding on the actors’ every word. While not directly related, one of the big highlights was Bella Thorne singing, I would appreciate more of that in any movie.

As I listened to the dialogue, I thought to myself, I could see this being my first 5 star review. The film’s conclusion reduced it by half a star. The movie ended in the perfect spot to give us Ride 2 (click on the spoiler box below to see where I think a sequel should go), but I don’t know that Ungar intended a sequel, so I would have preferred an extra 15 minutes of content to wrap up the story a bit neater.

My Thoughts on a Sequel
The film ends with Jessica and James escaping, but Bruno still has James’ phone and he receives a new ride sharing request. Bruno accepts the call and the movie ends. I would love a follow up that starts immediately where this film ended – Bruno has the customer in the car, using his charm and charisma to keep her attention until he flips a switch and the simple ride share becomes a horror story for the passenger. Using the miracle of movie magic, James gets a new phone and sees the alert for a ride share. He and Jessica realize they must become the heroes of the story and save her before Bruno kills her. We end up with a game of cat and mouse played out across the city, a sort of scavenger hunt with the ride sharing app as the map.

At the end of the day, this movie is shorter than many of the films that we see released these days, so it’s definitely worth the time to see the top notch acting and dialogue. 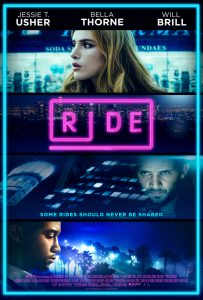 Movie description: A struggling actor by day, James (Jessie T. Usher, Independence Day: Resurgence) pays his bills by driving people around Los Angeles for a ride sharing service. His night starts out like any other, but he can’t believe his luck when he picks up the beautiful Jessica (Bella Thorne, Assassination Nation), and they immediately hit it off. His next fare, the fast-talking Bruno (Will Brill, The OA), convinces James to go back and invite her to join them for a wild night out. But things take a shocking turn when Bruno, armed with a gun and a twisted idea of fun, forces them on a terrifying, white-knuckle ride that quickly spirals out of control.

This is an interesting film to review. Tom Clancy’s Without Remorse is the worst film I’ve seen based on a Tom Clancy novel, but it’s still a decent flick. While I expected to get a 90s […]