Let’s start with honesty… I didn’t expect much from Boiling Point. In fact, after seeing the trailer, I wasn’t even sure I wanted to review the film. The trailer looked like it had been put together by first year film students who failed the assignment. Then, I watched the movie and everything changed. The movie is brilliant. Co-writers Philip Barantini, who also directs, and James Cummings created a really compelling story that made me feel like I was on the line and in the weeds. My wife, in a previous life, worked in a kitchen and it definitely looked like some of the stories she would tell.

Authenticity was my top priority; it needed to feel real. When I wrote the screenplay with James Cummings, we devised a script that favored detailed bullet points in place of written dialogue – and it was with this that our amazing cast, led by Stephen Graham and Vinette Robinson, workshopped and improvised their lines. As a result, each character is filled with an entirely unique perspective and personality, and it’s because of this that the film feels so much like a real kitchen. With that realism, it is my hope that we can help change the general public’s perception of the restaurant business, and those who work in it, by putting every member of the audience in the shoes of someone working in that kitchen, as if working a real shift along with our chefs.

I found it absolutely fascinating that the entire film was workshopped and improvised. Although, it makes a lot of sense because every character felt real. This is something that is quite rare when you have such a large ensemble cast, but it worked really well, everything just flowed. The entire group was amazing and you felt awful for some of them and wanted to scream at others. Tons of credit though has to go to Stephen Graham (Andy) and Vinette Robinson (Carly), they were both incredible on screen. They weren’t without a ton of support though, every cast member from those playing kitchen staff to front of house to the guests in the restaurant were absolutely incredible to watch and it was completely captivating. A lot of the time, when a movie looks like it’ll be a dud, I don’t focus 100%. This film made me stop doing everything else and completely focus on it, it was too hard to look away.

So, what is the movie about? It’s a night in a restaurant. Rather, it’s 90 minutes in a restaurant since the film is shot in a single take. That’s the coolest part of the movie. A single take from start to finish. This is part of what makes the cast so bloody brilliant. I believe I only caught 2 or 3 instances of a line being forgotten or flubbed that was noticeable. It is entirely possible that it happened more frequently, but the cast were all professionals and that was all I could catch. The restaurant is struggling and the kitchen staff are rushed working for a checked out, but brilliant chef whose life is in shambles. His business partner runs the front of house and is more interested in showing up on Instagram than running a business. The diners at the restaurant on this night include the chef’s former boss turned celebrity chef, a restaurant critic, a couple with a planned engagement, a group of partying women from the US, and some “influencers” (aka jerks). If it can go wrong, it probably will but the staff are professionals and handle most things relatively well.

I don’t want to spoil the film, but you can look forward to: drug use, horrible customers, racist customers, an allergy, an overly critical health inspector, and a list of other things. The film is absolutely packed with content and it is a bad rush from start to finish… you might even find yourself out of breath by the end of the night.

The 90-minute one shot approach was all about dropping our audience into the madness – that documentary feeling, giving the film an added layer of realism and tension. It was an incredibly intense and difficult thing to pull together, especially with the oncoming lockdown that shut us down before filming could really be finished. Every second that passed as we filmed was all together filled with a mixture of dread – that something could go wrong – and relief that nothing had yet gone wrong. I’d lay in bed at night wondering whether we were going to pull it off, and it’s really a testament to every one of our team that we managed it by the skin of our teeth!

At the end of the day, the film doesn’t look like much if you check out the trailer, but trust me when I say that it is worth watching. It progresses forward so rapidly and with a constant stream of action, so you are drawn in and just can’t turn away. The cast and crew really did do an amazing job and, if you recall from Last Call, I’m absolutely mesmerized by single take films. This is one that you’ll want to check and and be prepared for all the feels because it is impossible to not find yourself feeling like a member of the line living that shared experience.

Boiling Point was released in theatres on November 19 and will be available on VOD and Digital on November 23. 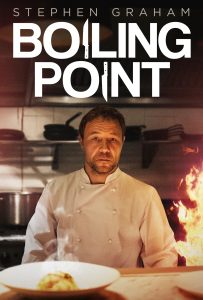 Movie description: On the busiest night of the year at one of the hottest restaurants in London, charismatic, commanding head chef Andy Jones (Stephen Graham) balances along a knife’s edge as multiple personal and professional crises threaten to destroy everything he’s worked for. A surprise visit from a health and safety inspector sets the staff on edge as the overbooked hotspot begins to fill with guests. Jones alternately berates and cajoles his diverse staff, trying his best to diffuse tensions between management and his crew, while catering to the ridiculous demands of customers.

I used to say that I hated documentaries and, lately, I’ve seen a lot of really good documentaries. I was really thinking that I was becoming a fan of the genre, then I watched All Light, […]