It might be the nostalgia or it might be that I’m in my mid-30s and can relate to putting life on the back burner for work, then again, it might be a bit of both, but I don’t see how Christopher Robin could be anything short of a 5-star film. When the movie started, my wife simply said, “Oh no, this is going to be a sad one.” Since the film begins with Christopher Robin leaving the Hundred Acre Wood, it definitely seems like it could go that way. Instead, it was a touching, lighthearted romp. There were plenty of moments to laugh and just a few where your eyes teared up, but they were happy tears, because, ultimately, it was a happy movie.

I’ve never been a very religious person, but for some reason this movie made me think of 1 Corinthians 13:11, ‘When I was a child, I spake as a child, I understood as a child, I thought as a child: but when I became a man, I put away childish things.’ That is ultimately the story we see here. A boy, forced to grow up quickly, leaving behind his childhood; forgetting the wonder and amusement that he found when he opened his eyes and looked around. Loss, war, and supporting a family turned Christopher Robin into a man driven by work, focused on the unimportant… he lost his inner child and, at one point, it seems like he may lose his family.

The film gives us a quick summary of Christopher Robin’s life from child to husband to soldier to father, before we get to the timeline for the actual story. It has been years since he has visited Hundred Acre Wood and played with Pooh, Piglet, and the rest of the gang. Instead, he is an efficiency expert at a luggage company who sacrifices time with his family to work extra hours, something many of us know all too well. Tasked with finding a way to reduce costs by 20%, he abandons his wife and daughter just as they are all about to leave for a family weekend at the cottage. This is when Pooh reappears in the life of adult Christopher Robin, a task driven man who has forgotten how to have fun… the timing couldn’t have been any better.

My wife, the Disney fan in the family, has typically not been a fan of the live action remakes, but she loved this one. There are so many classic Winnie the Pooh elements combined with a touching story about remembering what is truly important in life. Jim Cummings voicing Pooh, Tigger singing “The Wonderful Thing About Tiggers”, Piglet’s fear of everything, the use of “haycorn” instead of acorn – the film is chock-full of nostalgic references that will delight any Winnie the Pooh fan.

Ewan McGregor did a brilliant job of portraying the transition from stodgy company man to fun-loving father and friend. Hayley Atwell nailed her role, particularly a scene where she and McGregor are together in a car. I don’t want to spoil it, but her reactions are amazing. Bronte Carmichael also did an amazing job as Christopher Robin’s daughter, Madeline. She constantly reminded me of Mara Wilson in Matilda.

The only time the animation and live action didn’t mesh well for me was a scene where Christopher Robin hands an item for Pooh, for a split second it felt disconnected and off. It really stood out and knocked me out of the fantasy world, but it was such a minor point in an incredible film, that it still felt worthy of 5 stars. There is no reason to delay seeing this movie, it should be at the top of everyone’s list right now. 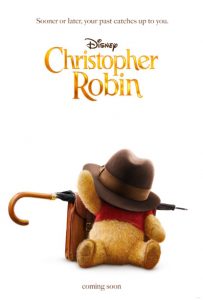 Movie description: In the heartwarming live-action adventure, the young boy who embarked on countless adventures in the Hundred Acre Wood with his band of spirited and lovable stuffed animals has grown up and lost his way. Now it is up to his childhood friends to venture into our world and help Christopher Robin remember the loving and playful boy who is still inside.