Tonight, Ray Romano’s comedy special premiered on Netflix. Last night, I watched Ray in Paddleton, and I’ve been eagerly awaiting the premiere of this special. I was not disappointed and I was happy to see that Ray was as funny as he has always been, the stand-up was nearly perfect.

I don’t want to spoil the jokes, but I will say that he spends a lot of time talking about his family, which was nice to see. It was honestly funny and, to steal a word from Ellen’s special, very relatable. My wife and I both laughed at his jokes, particularly his jokes about married life. We may not have been married as long as he has, but we could definitely relate to everything he was saying. If you enjoy a good stand-up special, this is a show for you.

The show starts with Ray walking the streets of New York on his way to the Comedy Cellar, where he performs the first half of the special. Part of the amusement of the special was watching him walk down the street and seeing people pull out their phones to try and quickly snap photos of him. At one point, when he passes a man and woman on a corner, she pulls out her phone and quickly takes a picture of him from behind, something that several people do. I frequently tell people about the time I met Margo Martindale walking down the street in New York, it was one of the highlights of my celebrity encounters and I share the photo we took with everyone, but rushing to take a picture of someone walking away feels odd, so it was amusing to see so many people rush to do just that.

The special ends with Ray introducing his family as they walk down the street for a whole pie at Joe’s Pizza and closes with them sitting in the window, eating.

At the end of the day, it was an hour of non-stop laughter. The only awkward moment was an audience interaction, where he comments that someone must be married and they reply with, “No.” and, “It’s a long story.” I did notice, and I’m curious to know if it was that they re-shot a single moment or it was just coincidence, that during one scene at the Village Underground, there are different audience members. It was quite noticeable, and my wife and I ended up rewinding to re-watch that segment to see if it happened again (spoiler alert: it doesn’t). Those are pretty minor points in a standout experience. If you’ve got an hour free, check it out… you won’t be disappointed. 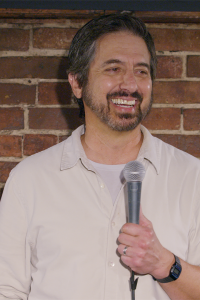 Description: 23 years after his last stand-up special, comedian, screenwriter, and Emmy Award-winning actor Ray Romano debuts his first Netflix comedy special, Ray Romano: Right Here, Around the Corner. Performing two sets on the same night - one at Manhattan’s Comedy Cellar and the second at the Village Underground, literally around the corner - Romano advises on choosing friends, surviving marriage, and knowing the difference between being old and not being young