Paddleton is a new film from Netflix that premieres on February 22 staring Mark Duplass and Ray Romano. The film takes us through the twists and turns of two middle-aged single friends from the point where they learn that one of them has a terminal illness. This movie was special to me for a few reasons. One is that Netflix is amazing, they’re one of only a few companies that work with small, independent reviewers like myself and have opened so many content doors for me. More importantly, two of my favourite actors are in this movie and they really don’t have to share the screen with anyone else. I first encountered Mark Duplass when I watched Safety Not Guaranteed and later when The League was finally available in Canada. It quickly became clear that he was a genius on screen. Ray Romano created comedy gold with Everybody Loves Raymond, was the only reason I watched Men of a Certain Age, and was a great late addition to Parenthood. With this combination, it seems clear that Paddleton is destined to be a hit.

So, what is Paddleton, where does the title originate? It’s actually a game played by our leads in the film, and I think it’s best to let Mark Duplass describe it.

The way it works is they have shitty racquetball racquets, and racquetballs. And there’s an old drive-in movie theater that’s defunct with a large wall made of corrugated metal. Their goal is to hit the racquetball against this 100-foot wall, and have it bounce back into a trash can that has been pre-placed. But the problem is the corrugated metal means this thing could shoot off in any direction.

Ray Romano added to this description.

Once the ball hits the wall it has to just bounce in on its own. A couple times it bounced in the can and came out of the can — that’s no goal. You see how many goals you can get in in a certain amount of time.

As Duplass puts it,

Paddleton is a game you play together to try and collectively win. And that is the metaphor for these guy’s relationship.

The film itself follows Michael (Duplass) and Andy (Romano) as Michael learns that he is dying of stomach cancer. The film is roughly 80 minutes of the two men spending time together after Michael decides to pursue medically assisted death. The film was co-written by Duplass and came to be after Duplass and Romano met at the premiere of The Big Sick, an amazing film in its own right. Interestingly, the script for the film was only twenty pages long, with the majority of it improvised. I had been suspicious watching the film, as it didn’t seem as polished as other movies of this nature, but it felt real and very natural. I think both men did an amazing job of bringing the film to life. In fact, I originally rated this a 4.5, but when I learned it was improvised, I immediately bumped it up to a 5/5.

Expand for Mild Spoilers
At one point in the film, I was reminded of RENT (the all-time greatest musical). As Michael and Andy fight over who will hold onto Michael’s prescription, Michael says, “I’m the dying guy” repeatedly and Andy finally replies, “I’m the other guy.” RENT touches on this same concept in the song Goodbye Love. When Roger calls out Mark for being numb, Mark replies, “Perhaps it’s because I’m the one of us to survive.” I think this touches on an important fear that so many of us have. While I’m afraid of dying and leaving loved ones behind, the fear of being left behind is very real and very powerful, Paddleton makes you feel this, it makes you realize this fear.

About an hour into the film, I said, out loud, “This is going to be a hard ending.” That was an understatement. I’m still writing this review and the tears are still in my eyes. You fall in love with these socially awkward men and the love that they share. You feel their quirks and understand them. Watching both of them deal with this horrible situation is painful. As the film comes closer to it’s conclusion, Andy remarks that he should have taken the last month of work to spend more time with his friend. I think this is an honest sentiment that we all need to reflect upon in the digital age. How often do we pass on spending time with someone because it’s more convenient to stay in? How many friends have we drifted away from until we’ve simply lost touch? I know I’m guilty of this and it made me realize how much I desire the friendship that Michael and Andy clearly have.

This movie had a real impact on me in a way that few movies have. It is an outstanding film that is unlike anything I have seen before. If you aren’t watching this movie on February 22, then you’re doing yourself a disservice. I already want to watch it again for the first time, to experience it all over again with fresh eyes. Simply put, what a great film! 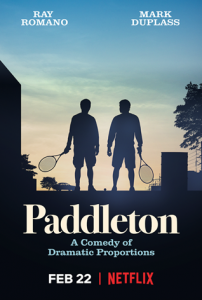 Movie description: An unlikely friendship between two misfit neighbors becomes an unexpectedly emotional journey when the younger man is diagnosed with terminal cancer.