It’s official… I’m declaring this film my first 5-star review. So, let’s just get that out of the way right now. This movie was hilarious, touching, cute, and all together amazing. When one of the earliest scenes in a film features a woman blowing on a plant saying, “Don’t die… come on photosynthesis.” I feel like you know you’re in for a good movie. Kudos to Victor Levin for a brilliant film, both the writing and the direction. At one point, early on, I momentarily wondered if I was watching a Woody Allen film and had to look it up to verify. I will admit that I went into this completely blind. I had not heard of the film, I simply saw the cast as I was scrolling through iTunes, turned on the trailer, and immediately rented the movie.

Speaking of the cast, how can a movie go wrong when the male lead is Ted Logan, Johnny Utah, Jack Traven, Johnny Mnemonic, Neo, John Constantine, and John Wick – I just realized that is a lot of Johns – none other than Mr. Keanu Reeves himself. Opposite him, we had Lydia Deetz, Veronica Sawyer, Kim Boggs, Susanna Kaysen, Amanda Grayson, and Joyce Byers – the always amazing Winona Ryder. Right off the bat, we have two actors that are absolute powerhouses, the stars of some of the biggest films with immense amounts of staying power across the decades and they’ve shared the screen in the past with Bram Stoker’s Dracula and A Scanner Darkly. To top it all off, their chemistry was out of this world. The back and forth of their lines, the tenderness of their touch, the joy in their eyes that just doesn’t exist without strong chemistry and a real world connection – I was grinning from ear to ear the entire time and, as the movie ended, my smile grew because I felt like I had watched a masterpiece.

With that said, I will be the first to acknowledge that this movie will not be for everyone. My wife watched it with me and, while she laughed on a regular basis, she commented that the movie was “not for her” and that she “wasn’t enjoying it as much as I was.” I don’t feel that you need to be huge fan of RomComs to enjoy this film, although it wouldn’t hurt. You do, however, need to enjoy verbal sparring. The movie is dialogue driven – a machine-gun like back and forth of verbal jousting – as our overly cynical leads are trapped in a battle of wits. It might just be one of the most quotable films I’ve seen with a lot of intellectual barbs.

Frank: Why would anyone have my mother as their maid of honour?
Lindsay: I know, it’s like having the Grim Reaper at your CAT scan.
Frank: If I had a nickle for every time she said to me, “I am not your maid.”
Lindsay: Was she born during The Great Depression?
Frank: No, she caused it.

Backing up, the premise of the movie is simple – a pair of unlikable cynics meet each other waiting for a flight. They find themselves sitting together on the flight and their disdain for each other is already quite evident. It is also clear that these are people we should dislike, but I find myself drawn to both of them. They discover they are heading to the same destination wedding. Frank (Keanu Reeves) is the half brother of the groom, while Lindsay (Winona Ryder) is the groom’s former fiance. As the two bond over their mutual dislike of everyone and everything, they slowly grow to enjoy each others company. One of my favourite aspects of this was watching both of them fight the growing attraction, their cynical side fighting the optimism they feel when around each other… the possibility of a future that isn’t filled with bitterness.

Lindsay: My theory, about myself, is that my soma is sending me a Darwinian message telling me, “Hey, you’re unfit to pass your DNA on to future generations, so you should just select out.”
Frank: Well, just keep doing what your doing.
Lindsay: But I have so much to give.
Frank: Not really.

Here’s the amazing part of this film, Lindsay and Frank are the only two speaking roles for the entire 90 minute run. There is background noise in a couple of scenes and there is added dialogue from the TV once or twice, but they only speak to each other on screen. I first realized it about 20 minutes in and thought it was simply a very cool intro, there was no way that they’d get through a wedding ceremony and reception, but they did. It was well done and didn’t feel like it took much effort, the interactions between Reeves and Ryder flowed so well that the movie felt natural and complete with just the two of them.

To reiterate, I loved this film, but it may not be for you. I suggest giving it a chance, hate the characters, get to know them, and grow to love them, just as they grow to love each other. While they are difficult (to put it lightly), they have endearing qualities. I could see a bit of myself in them and treated them as a reflection of seeing people at their worst. In the end, if you hate the characters and dislike RomComs, it should still be good for more than a few laughs because, above all else, this was an exceptional comedy. 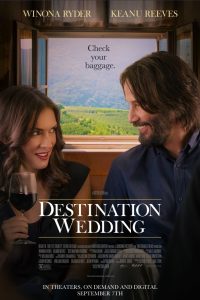 Movie description: DESTINATION WEDDING reunites two of Hollywood’s most adored stars, Keanu Reeves and Winona Ryder, as the socially awkward Frank and Lindsay. When they meet on their way to a destination wedding, they soon discover they have a lot in common: they both hate the bride, the groom, the wedding, themselves, and most especially each other. As the weekend's events continually force them together – and their cheerlessness immediately isolates them from the other guests - Frank and Lindsay find that if you verbally spar with someone long enough, anything can happen. When debate gives way to desire, they must decide which is stronger: their hearts or their common sense.

Moments in Spacetime is a fantastic Canadian film that was on the cusp of greatness. It was well written, well shot, and well acted… it had everything it need for me to want to give […]