“Relatable” is not the word that I would use to describe Ellen DeGeneres, yet it is somehow the premise of her new stand-up special on Netflix. I’m a big stand-up comedy fan. My wife and I take in multiple stand-up shows each year and watch quite a few of the specials that are released, yet we didn’t laugh a whole lot during Ellen’s special. There were a few chuckles here and there, particularly in the back half of the show, but nothing like the audience experienced. I’m not sure if we’re not the target for her humour or if the theatre was pumped full of laughing gas, but I’m not quite sure what everyone was laughing at.

One of my biggest problems was the theme of the show, “Relatable.” Ellen made constant references to how rich she was and above everyone else. I know this was supposed to be delivered in a funny way, but it wasn’t. It was tired and painful. I enjoyed Ellen’s sitcom years ago and my wife enjoys her talk show, yet this didn’t appeal to either of us. It just felt awkward and uncomfortable. The jokes that did land, landed softly. There was nothing that was hilarious and a lot of it felt pointless.

I’m sure you’re asking why I managed to give this 3 stars. The reason is simple, I’m not sure this was a stand-up special. If this had been labelled as ‘An Evening with Ellen DeGeneres” or “In conversation with Ellen Degeneres”, this would have been a great show. The 68 minute special should have been cut down to about 50 minutes. Those 50 minutes were easily divided into comedy (about 20 minutes) and backstory (about 30 minutes). Ellen told a few interesting stories and had some touching comments to make, but it isn’t something that I would normally classify as a stand-up comedy. So I didn’t look at it as such, instead I looked at it like it was just an evening with Ellen and from that viewpoint, it was quite enjoyable.

I do think that this special is worth watching, but if you’re expecting 68 minutes of laughter, you’ll find yourself very disappointed. 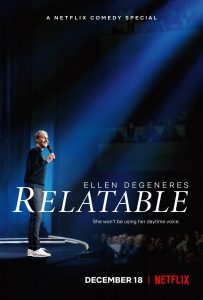 This year, Marlon, a show that has aired in the US for two seasons on NBC, appeared around the world as a Netflix Original. As a lifelong fan of sitcoms, I’m always looking for new […]