Let’s start with a quick recap – I love Nicolas Cage films and I love the quirky nature of RLJE Films. So, when I have the chance to see a Nicolas Cage film from RLJE Films, I’m going to jump at the opportunity. I ended up spending 110 minutes watching something that my mind wants to describe as absurd. The film is based on the 1927 H.P. Lovecraft novella, The Color Out of Space and, while I haven’t read the short story, it appears, based on Wikipedia and a few other write-ups, to do the plot justice. That said, the film does take some liberties in order to keep things modern and give it an updated feel.

So, why do I want to use the word absurd to describe the film? I’m actually not 100% sure, it’s just the word that’s been going through my head since the credits rolled. Before we discuss the plot and my feelings, let me just say that absurd is not a bad things here. The movie was interesting enough to keep me engaged until the end.

The story of Color Out of Space involves the Gardner family, a family that has moved away from the city for a quiet country life. The family patriarch, Nathan Gardner (Nicolas Cage) has moved his family to his father’s farm to get away as his wife, Theresa (Joely Richardson), recovers from cancer treatments. They have three kids that are quite unique – their daughter performs pagan rituals and their eldest son hangs out with a squatter on their property (the squatter is played by Tommy Chong). One night, a meteorite falls from the sky and gives the entire family a scare. Being away from civilization, there are limited resources to investigate and a hydrologist in the area (Elliot Knight) helps with the investigation. After spending a day with the strange meteorite, lightning starts to strike it repeatedly and this is where things go wacky. The Sci-Fi film takes on horror elements and everyone goes crazy.

As the family descends into madness, the entertainment value increases, particularly with Nicolas Cage. If there was ever a film that highlighted his over the top, over acting, it is this one. There are so many scenes with Cage that are beyond entertaining, but the one that stands out for me is seeing him scream, “Do you have any idea how much those animals cost us? They are Alpacas! Alpacas!” Without his performance, it may seem odd… but when you see it on screen, it is amazing. It is the first in a line of dialogue and performance from Cage that is simply amazing in this film.

When I think about it, I think the two standout performances are why absurd is such a fitting word for this film. The first is clearly Cage. The performance he gives is as crazy as they come and I loved ever minute that he was on screen. The other was from Madeleine Arthur, playing Lavinia Gardner, Nathan and Theresa Gardner’s daughter. She has the slowest descent into craziness in the family and plays in a couple of key scenes, yet her actions are just as absurd as those of her father.

There are a few jumps, a few scares, and an amazing use of colour (particularly pink), but ultimately it’s the performances of Cage and Arthur that make this film worth seeing. Check it out in theatres on January 24.

Color Out of Space 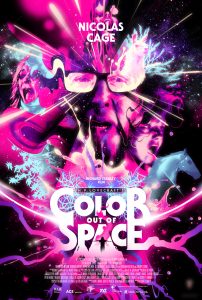 Movie title: Color Out of Space

Movie description: After a meteorite lands in the front yard of their farm, Nathan Gardner (Nicolas Cage) and his family find themselves battling a mutant extraterrestrial organism as it infects their minds and bodies, transforming their quiet rural life into a technicolor nightmare.

I always find it entertaining when I see actors that I consider to be mainstream in a B-horror film. That’s the case with Mary, a B-horror film from Michael Goi. Honestly though, the B-moniker may be […]