Sometimes you just want a mindless action flick. There’s definitely nothing wrong with that, I love to sit back and forget everything and watch a movie. It’s even better when it’s a stupid film that has a lousy initial premise because you know that you don’t have to invest too heavily. That does not, however, imply that it is a bad movie, even if it is a “bad movie.” That pretty much sums up how I felt watching One Shot. I actually enjoyed my time watching the film because I didn’t have to think or even really focus. All I had to know was that there were good guys and bad guys and guns. That’s the real upside of this film… the simplicity of it.

Here’s the premise of the film: A prisoner transfer is happening from a black site prison island. A SEAL team and a CIA analyst are sent in to pick up the prisoner. The prison refuses to release the prisoner, delaying just long enough for a truck to show up on the island at the prison gate. This is explained away as, “They brought it over by boat” and no one seems concerned about a random truck showing up. The truck is carrying the bad guys who are better than the soldiers stationed at the island. Guns are fired for over an hour. Almost nobody survives. Our hero saves the day.

That’s it… it doesn’t get much more simplistic than that.

So, let’s start with what the film gets right. First, it’s the casting of Scott Adkins. Adkins has been starring in low-budget action flicks for 20 years and he’s good at what he does. He knows he’s not in a Hollywood blockbuster and he seems to know that the people watching his films just want some mindless entertainment. He provides that and he does a great job. He’s believable in his role, something that doesn’t always happen in films like this.

Ashley Greene Khoury is another positive aspect of the film. She does a great job as the antithesis of everything else in the film. I feel like they wasted her character in the end, but she had a good run until that point and was enjoyable on screen.

That brings us to the film’s final star, the big name of the movie, Ryan Phillippe. I’m a fan of Phillippe in a lot of things, but I did not enjoy his character in this film. He wasn’t believable, which is strange because I thought he worked well when he was starring in Shooter. I’m not sure if it was the writing or the performance, but something was definitely off.

My only other big complaint was the lack of subtitles. The main baddie spoke a lot of French and I would have liked to have known exactly what he was saying. I find this is often an issue with lower budget films, they have a small portion of the film in a foreign language, but they can’t be bothered to provide subtitles.

At the end of the day, if you want mindless fun with a lot of shooting and some awesome knife fights, check out One Shot, if you want substance… you can probably stay away.

One Shot was released in theatres and on demand on November 5. 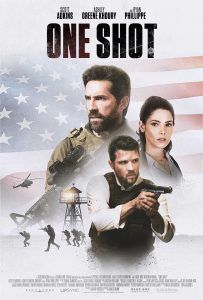 Movie description: In an effort to prevent a terrorist attack on Washington D.C., an elite squad of Navy SEALs led by Lt. Jake Harris (SCOTT ADKINS) and a junior CIA analyst Zoe Anderson (ASHLEY GREENE) must retrieve a detainee from a CIA black site island prison. Tensions flare as Site Manager Jack Yorke (RYAN PHILLIPPE) refuses to release the suspected terrorist based solely on Anderson's intel, but when the base comes under attack by waves of insurgents, they must band together to complete the mission.

Midnight in the Switchgrass feels like it should be a good movie… after all it’s a thriller with Bruce Willis and Megan Fox. I’m a fan of both actors and I’m a fan of thrillers. […]