This week the Toronto After Dark Film Festival happened and I had wanted to get tickets. Last year, I bought tickets for a number of shows, but work kept me from attending and I didn’t want that to happen again. Unfortunately, timing was bad and the one movie I wanted to see, Paradise Hills, just wasn’t going to work out. As luck would have it, the screener showed up a couple of days later and I was still able to sit down and watch the film.

The movie caught my attention initially because of the stars. I’ve been a fan of Milla Jovovich since The Fifth Element and Resident Evil. Emma Roberts has been great in so many movies, including We’re the Millers, Adult World, and Little Italy.  Awkwafina in Crazy Rich Asians and Eiza Gonzalez in Baby Driver both had great performances as well, rounding out an all-star, powerhouse cast. Add in a dystopian future setting and I was sold.

The movie centres around Emma Roberts’s character Uma, who is set to be married to a man she doesn’t love, so she rebels. Her groom-to-be and her mother send her away to Paradise Hills, a “boarding school” (of sorts) that helps young women become “perfect versions of themselves”. The setup is already creepy, but don’t worry, the film only gets creepier. The women are forced to change their appearance, to eat specific portions of specific foods, and exercise when told. Uma finds companionship in this strange place in her roommates Yu (Awkwafina) and Chloe (Danielle Macdonald) as well as Eiza Gonzalez’s Armarna.

The world in which the movie exists interests me greatly and I think that one of the shortcomings of the film was that it didn’t have more time to explore the backstory that created this world. Was it always this way? Was it our world after some drastic change? There are so many questions I had about the environment that just weren’t answered. Given the setting, a boarding school on an island and a ball room at a wedding, we see very little of the outside world. One thing that we do know is that they have hover cars and they looked awesome. I can understand why these details were left out, but it definitely has me intrigued. This is yet another movie where I would love to see a comic book tie in that provides a prologue, perhaps Uma’s life before she is sent to the island.

The movie has a few supernatural elements that were unexpected and, at first, I thought they were a figment of my imagination. Over time, however, the elements come out and it becomes clear that something is not right at Paradise Hills. Although, you probably guessed that when you heard that the premise of the movie is a school that forces women to change who they are. I don’t want to spoil any of the twists in this thriller, so I won’t say more, but I think viewers will be pleasantly surprised.

At the end of the day, this movie has superb acting, amazing costumes and sets, and a pretty decent story. As I said, I would have liked more backstory on the world, but I also would have enjoyed more background on Milla Jovovich’s Dutchess character. I was caught completely off guard with a few of the revelations and the movie was good enough to keep me intrigued until the ending. There were a few moments of “movie stupidity”, where a character makes a ridiculous choice in order to add to the tension, but those are becoming more and more common in films, so I can forgive them when I see them. I’m definitely glad that I watched this film and I’m amazed at the performances that were delivered, particularly by Emma Roberts who was absolutely brilliant on screen.

Check out Paradise Hills in theatres on October 25 and on Digital and on Demand on November 1. 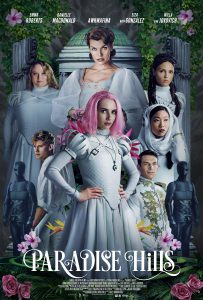 Movie description: On an isolated island, Uma (Emma Roberts) wakes up to find herself at Paradise Hills, a facility where high-class families send their daughters to become perfect versions of themselves. The facility is run by the mysterious Duchess (Milla Jovovich) where calibrated treatments including etiquette classes, vocal lessons, beauty treatments, gymnastics and restricted diets, revolve all physical and emotional shortcomings within two months. The outspoken Uma finds solace and friendship in other Paradise Hills residents -- Chloe (Danielle McDonald), Yu (Awkwafina) and Mexican popstar Amarna (Eiza Gonzalez). Uma soon realizes that lurking behind all this beauty is a sinister secret. It's a race against the clock as Uma and her friends try to escape Paradise Hills before it consumes them all.

Have you ever finished a movie and said, “Yep… that was a movie.” I feel like that could be the end of this review. The film was not very good, it felt like the writer/director, […]