Cute. That’s the first word that comes to mind when I think about Little Italy, the romantic comedy that gives us a Romeo and Juliet story set in Toronto’s Little Italy. When the movie finished, I looked at my wife and said, “Wow, that was really good.” Her response of “yeah, it was” is the gold seal of approval from her when you’re talking about romantic comedies, a genre she’s doesn’t typically enjoy. I wasn’t sure what to expect going into the film. While it had a few names I like to see – Emma Roberts, Alyssa Milano, and Andrew Phung – it also starred Hayden Christensen and I’ve never been able to forgive him for Stars Wars episodes 1, 2, and 3. It also had horrible reviews from local critics and on local forums. Toronto is about as pretentious as English speaking Canada gets, so that shouldn’t be overly surprising, but it did cause me to consider how much I was willing to pay to see the film. Ultimately, I decided to pre-order it and I’m glad that I did.

Nikki (Emma Roberts) is living in Europe studying to be a chef, when she is presented with a job opportunity that will require she return home to Canada to apply for a new visa. In Canada, a place she clearly doesn’t want to be, she reunites with her friend and former childhood crush Leo (Hayden Christensen). The two grew up together with families that owned a pizzeria. A feud caused the families to break apart and go to war, pizza war – operating competing restaurants side by side. While Nikki is home, tensions between their parents escalate, culminating in Nikki and Leo battling it out to see which family has the best pizza in the exact competition that started the feud all those years ago.

The film is really cute, with a few recognizable Toronto landmarks. The benefit of seeing a Toronto-based film and living here is you can recognize when certain places are used for other locations, such as the MTCC South Building used as a replacement for the airport. Additionally, it gives us a couple of love stories and some really funny moments that make you grin. You also get Andrew Phung, who gives an amazing performance – side note: as I was writing this, I saw that I missed a tweet and he was performing improve tonight… very disappointing. He seems like the kind of the guy you’d want to sit down and have a beer with and you know it’s going to be an entertaining night.

If you haven’t seen it, I highly recommend checking out Little Italy. I suspect this is one that will go on my late night, I need something to re-watch list because I thoroughly enjoyed it. 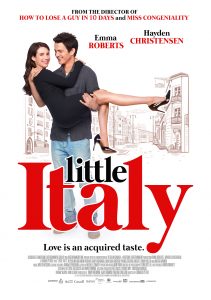 Movie description: The director of How to Lose a Guy in 10 Days and Miss Congeniality serves up a delicious new comedy topped with passion, playfulness, and pepperoni. Former childhood pals Leo (Hayden Christensen, Star Wars series) and Nikki (Emma Roberts, We’re the Millers) are attracted to each other as adults—but will their feuding parents’ rival pizzerias put a chill on their sizzling romance? The tasty all-star cast also includes Alyssa Milano (“Charmed”), Andrea Martin (My Big Fat Greek Wedding), and Danny Aiello (Do The Right Thing). Features the smash hit “There’s nothing holding’ me back” by Shawn Mendes.

I’m a fan of Sherlock Holmes, but I’ve never been a die hard fan. I don’t own the complete works of Sir Arthur Conan Doyle and I haven’t read every story, but I’ve enjoyed the […]