By now, readers of my reviews will know that I’m a huge fan of romantic comedies. I’m always looking for the next big thing and I’ve been lucky enough to discover a few unexpected gems recently. Films like Plus One and The New Romantic were both great romantic comedies, but, as far as I’m concerned, Ode to Joy came out of left field. The trailer looked decent and I’m always excited for a romcom, but I had absolutely no idea what I was getting into. I never thought I’d see a movie with the line, “I’m sexually attracted to Bob Newhart,” but now I have. I should also point out that, while I’m calling this a romantic comedy, the writer, director, and cast have all said it is so much more than that. I agree with them completely, but in my heart I put this movie squarely in the romcom category.

Before we get into the film, which I loved, let’s talk about the brilliant cast. The film, as the poster would indicate, centres around Martin Freeman (Charlie) and Morena Baccarin (Francesca). Freeman is well known from playing Bilbo in The Hobbit films, but he’s one of the actors in this film I’m least familiar with. Baccarin, on the other hand, is, in my opinion, one of the most instantly recognizable women in film – ever since she played Inara on Firefly, she’s stood out in everything she’s done. My wife instantly recognizes her on screen as Chloe, the barista that Marshall dates when he and Lily are broken up on How I Met Your Mother. A single episode in a series that ran for nine season and Morena Baccarin still stands out. Charlie’s siblings are played back Jake Lacy and Shannon Woodward, who was incredible as Sabrina in Raising Hope. Finally, we have two of the funniest people acting today – Jane Curtain as Francesca’s aunt Sylvia and The Big Bang Theory‘s Melissa Rauch as Bethany. While Sylvia is not a comedic role, Curtain has her moments. The film, however, is stolen by Melissa Rauch. The film’s producer, Mike Falbo, referred to Rauch as a “comedic assassin” and I think that term is most fitting. Her portrayal of Bethany is one of the best performances I’ve ever seen on screen. Here’s what Melissa had to say about relating to the character:

There’s something I really admire about her in that she is 100% herself, from the way she dresses to the things she talks about and the things that she’s passionate about. I feel like if I let my true inner self come to the forefront, I think there would be a lot more Bethany. I’d certainly dress a lot like her.

There are quite a few times when Rauch had me in stitches, her deadpan delivery is some of the best that I’ve ever seen, but the standout scene for me involves Melissa, a cello, and a cover of Zombie by The Cranberries. Regardless of the price of admission, the film is worth seeing for that scene alone.

Enough gushing over the amazing casting, I should probably talk about the film. The film follows Charlie, a man who suffers from narcolepsy with cataplexy – whenever he feels strong emotion, in his case primarily joy, he passes out. This can be triggered by anything – a man walking down the road with his granddaughter, reading to children in the library, a tender moment with a romantic partner, or a song by The Pointer Sisters. He lives a rather solitary existence, keeping things dark and unpleasant… so much so that his walk-to-work music is Siegfried’s Funeral March by Wagner. One day, at work, he meets Francesca at a low point in her life and they have an immediate connection. Breaking all his rules, Charlie attempts to go out on a date with Francesca with disastrous results. What follows is a film filled with pain, laughter, and tears. I know that it’s supposed to be a comedy, but, to me, it has everything that makes a great romantic comedy.

That said, the film is more than just a romantic comedy where you laugh at a guy that passes out – most of the time you feel really bad for Charlie, it’s hard to watch him suffer. It encompasses all of the fears that we all feel when it comes to putting our hearts on the line, the only difference is that Charlie’s illness turns the volume to to 11. I think that the subject matter, a man battling this rare condition, is what gives this film its power. It is a gut punch at times because it feels real. I’ve said in the past that romantic comedies need that manufactured drama to get us from happy to sad to tearful conclusion, but this film doesn’t. The drama is baked into the story and, like I said, feels real.

Melissa Rauch, who was amazing in The Big Bang Theory, but I fell in love with in this film, may have said it best:

We’ve seen hundreds of thousands of love stories, and it’s like, if you’re going to do a love story, it has to be a new, fresh take, in order for it to be, I feel, compelling. It’s hard to do a different take on a romantic comedy, and this isn’t, of course, solely a romantic comedy, but it’s a story that we have not seen at all.

Before I wrap up this overly long review, I’d like to also call attention to the cuts between scenes. The shots around New York of people filled with joy and happiness as they experience life in a variety of ways was a genius contrast to the pain we see in Charlie, to the avoidance of joy that his days require. It was a very well thought out collection of shots that normally seem like an afterthought in most films, but felt filled with purpose in this one.

Finally, I’ll leave you with the words of the film script writer, Max Werner:

Fulfillment in love is about acceptance, and that ultimately is what Charlie’s story is all about, finding someone who accepts him for who he is.

And the film’s director, Jason Winer:

Can he handle it? Can he go for it? After years of avoiding happiness and avoiding love, will he go for it now?

Check out Ode to Joy in theatres, On Digital, and On Demand on Friday, August 9, 2019. I’ve already seen it, but I’ll be buying a copy to add to my library. 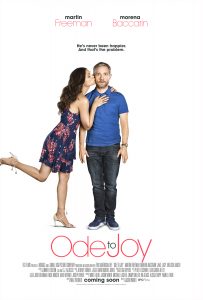 Movie description: Martin Freeman (The Hobbit) has fallen in love and can’t get up. A man’s fervent attempts at subverting happiness once it begins to cause him bouts of narcolepsy are put to the ultimate test when he falls in love.