Tonight, I settled in to watch Plus One, a romantic comedy from RLJE Films, written and directed by Jeff Chan and Andrew Rhymer. The pair began developing their first feature film as they watched their college friends start to marry off. They did an impressive job, it’s difficult to tell that this is their first time writing and directing a feature.  The film stars Maya Erskine as Alice and Jack Quaid as Ben – college friends who agree to be each other’s plus ones for a series of 10 weddings over the course of the summer. Ben is looking for that perfect relationship – his own meet cute – while Alice is fresh off a nasty breakup and clearly not over it yet.

One of the aspects of the film that I really enjoyed was that it was a little more realistic than the bubblegum romantic comedies that you find in the mainstream (such as those aired on The Hallmark Channel). The characters felt genuine – they were funny, sweet, vulgar, and broken. Ben is the perfect idiot, unable to recognize a good thing and searching for that perfect relationship. If I had to find another character that best summarizes Ben’s search, I would say that it is Ted from How I Met Your Mother – Ted is a more of a hopeless romantic while Ben wants that instant connection, but they’re both on a quest to find that perfect match… “the one”. Alice on the other hand… well, this might be the first time I’ve found myself crushing on a character in a film. She was sarcastic, funny, vulgar, and caring. You find yourself wanting to scream at Ben as he continues his search with Alice right in front of him, but I guess that’s the sign of a good romantic comedy.

Ben can’t be completely blamed for letting perfect be the enemy of good and one great thing the writers did was find a way to fit so much backstory into a reasonable movie length. We see Ben and Alice’s backgrounds and family life and we encounter them in very different ways. They both fit the characters and the movie, yet provide very entertaining scenes. Which brings us to another important point about this film. Instead of being written with those “smile, half-laugh, isn’t that cute” moments that you see in the bubblegum romcom, we get quite a few scenes that deliver laughter akin to traditional comedies. There are a couple of scenes where I burst out laughing, one of which was in the trailer, but I still laughed seeing it again in the film.

I keep thinking about the excellent casting for this film. I was already excited to see The Boys, an upcoming series starring Jack Quaid and had considered watching Maya Erskine’s series PEN15, but both shows have now moved further up my watchlist. The performances by both stars of this film were amazing and the supporting cast, in particular Ed Begley, Jr. and Rosalind Chao, really helped fill out the film. This is really all that you can hope for in a film – Great writing and direction performed by an incredibly solid cast to bring you a picture perfect romantic comedy. I will say that the final scenes brought the slightest of tears to my eyes, but I’m a sucker for a good romantic comedy, so I may be in the minority when it comes to that.

If you get a chance, check out Plus One, in theatres and on digital and on demand on June 14th, 2019. If you enjoy romantic comedies, this will be 99 minutes well spent. 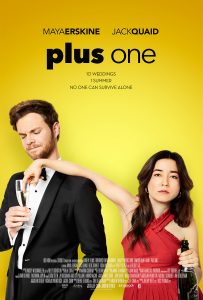 Movie title: Plus One

Movie description: Long-time friends Alice and Ben find themselves in that inevitable year that all late 20-somethings experience—in which seemingly every person they know gets married—and agree to be one another’s plus ones as they power through an endless parade of insufferable weddings